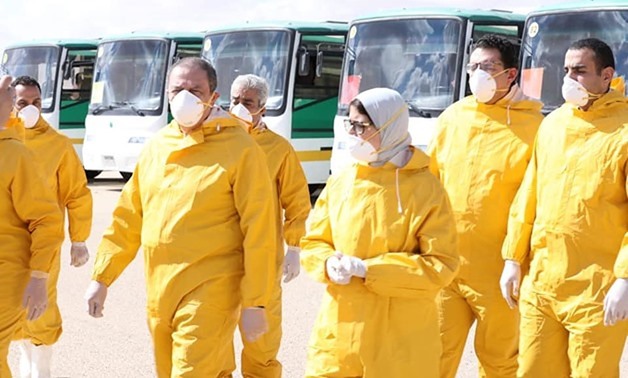 CAIRO - 29 February 2020: The Egyptian Ministry of Health announced that it is in contact with France and Canada after the two countries confirmed cases with coronavirus disease 2019 (COVID-19) coming from Egypt.

David Williams, medical officer of health in Ontario, said on Friday that eight cases, including a man coming from Egypt, were tested positive for the virus in Toronto’s Ontario, CBC reported. Consequently, the cases reported in Canada rose to 16 people so far.

"Throughout his travels, the man wore a mask," the Ontario Ministry of Health said in a release. "Toronto Public Health is actively engaged in contact tracing and case management," he was quoted as saying by the CBC.

French Minister of Health Olivier Véran announced on Friday that there were six people on holiday in Egypt and two of those people were diagnosed with Coronavirus, noting that the total number of people in France increased to 57 cases for far.


The Ministry added in a statement on Saturday that there is effective
communication with the World Health ORganization (WHO) in this regard, adding that contact WHO to get data with the itinerary and the places where the Canadian man visited.

The ministry continued that Egypt has not recorded any cases with the disease currently or even carrying the virus.

On Friday evening, Egyptian Health Ministry Spokesperson Khaled Megahed said that Egypt is still waiting for clarifying information from the French side.

Consultant for the epidemiology of the World Health Organization (WHO) in the Regional Office for the Middle East Amjad Al-Khouli told DMC talk show on Friday evening that Egypt has requested some additional data for the identity of two cases and the people who were in contact with them.

He added medical tests or quarantines are being conducted only on the arrivals coming to Egypt from countries where the virus is spread.

Egypt was the first African country that reported a Coronavirus case for a Chinese person early February. Two days ago, the Ministry spokesperson said in a statement that the Chinese patient was tested negative after receiving the treatment and that he is not in quarantine anymore.

Egypt's Prime Minister Moustafa Madbouly affirmed that the government is not hiding any updates regarding coronavirus, and that they are dealing with the crises with "transparency."

During a Cabinet meeting on Thursday morning, Madbouly discussed all of the precaution measures taken by the health ministry in cooperation with the World Health Organization (WHO).

In a press conference held on Friday, WHO Director-General Tedros Adhanom Ghebreyesus announced that the total number of coronavirus around the globe reached 83,310 cases, including 78,959 in China. Also, 2,858 deaths were reported so far, he added.

Over the past few days, dozens of coronavirus cases, coming from Iran, were registered in the Arab and Gulf States such as Kuwait, Bahrain, Oman, the UAE, Iraq, Lebanon, Egypt, and Algeria.

The Egyptian embassy in Kuwait called its nationals to be vigilant and avoid crowded places in the Gulf State where the number of infected cases with deadly coronavirus is increasing.

The embassy also asked the community to follow the necessary health and preventive guidelines amid the increasing number of coronavirus cases across the region.

In an effort to prevent the spread of coronavirus, Saudi Authorities imposed on Thursday a temporary ban on entering the Kingdom for performing Umrah [small pilgrimage] in the holy city of Mecca or visiting the Prophet's Mosque in Medina.

EgyptAir cancelled all bookings of Umrah visa holders until further notice upon the decision taken by the Saudi authorities.