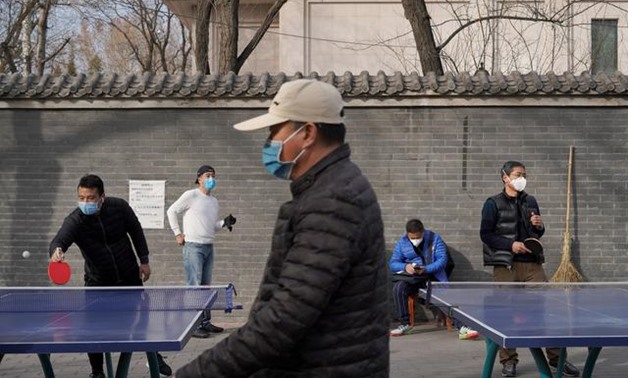 People wearing face masks play table tennis at a park, following an outbreak of the novel coronavirus in the country, in Beijing, China February 21, 2020. REUTERS/Stringer

BEIJING (Reuters) - China reported a sharp decrease in new deaths and cases of the coronavirus on Saturday but a doubling of infections in South Korea and 10 new cases in Iran added to unease about its rapid spread and global reach.

Mainland China had 397 new confirmed cases of coronavirus infections on Friday, down from 889 a day earlier, but only 31 cases were outside of the virus epicenter of Hubei province, the lowest number since the National Health Commission started compiling nationwide data a month ago.

But infection numbers continued to rise elsewhere, with outbreaks worsening in South Korea, Italy and Lebanon and Iran, prompting a warning from the World Health Organization that the window of opportunity to contain the international spread was closing..

South Korea saw another spike in infections, with 229 new confirmed cases, taking its tally to 433. Officials warned that could rise substantially as more than 1,000 people who attended a church at the center of the outbreak had shown flu-like symptoms.

Iran, which had no reported cases earlier this week, saw 10 new cases, one of which had died, taking the number to 28 infections and five deaths.

Concerns about the virus weighed on U.S. stocks on Friday, driven by an earlier spike in cases in China and data showing stalling U.S. business activity in February. [MKTS/GLOB]

It has spread to some 26 countries and territories outside mainland China, killing 13 people, according to a Reuters tally.

WHO director-general Tedros Adhanom Ghebreyesus on Twitter expressed concern on Saturday about cases with no clear link to China and called on all countries to invest urgently in preparedness. He made an appeal for $675 million to support the most vulnerable countries.

On Friday, he said now was the time to act decisively.

“We still have a chance to contain it,” he said. “If we don’t, if we squander the opportunity, then there will be a serious problem on our hands.”

An outbreak in northern Italy worsened with its first two deaths, among 17 confirmed cases including its first known instance of local transmission.

Japan confirmed 14 new coronavirus cases on Saturday, among those a teacher who had shown symptoms while working at her school.

Japan is facing growing questions about whether it is doing enough to contain its spread, and concern about whether it could scupper this year’s Tokyo Olympics. Organizers on Saturday postponed the start of training for volunteers as a precaution.

The Bank of Japan’s governor on Saturday shrugged off talk that the widening epidemic is triggering an outflow of funds from Asia.

NEW COMPLICATIONS
The total number of confirmed cases in mainland China rose to 76,288, with the death toll at 2,345 as of the end of Friday. Hubei reported 106 new deaths, of which 90 were in Wuhan.

But new, albeit isolated findings about the coronavirus could complicate efforts to thwart it, including the Hubei government’s announcement on Saturday that an elderly man took 27 days to show symptoms after infection, almost twice the presumed 14-day incubation period.

That follows Chinese scientists reporting that a woman from Wuhan had traveled 400 miles (675 km) and infected five relatives without showing signs of infection, offering new evidence of asymptomatical spreading.

State television on Saturday showed the arrival in Wuhan of the “blue whale”, the first of seven river cruise ships it is bringing in to house medical workers, tens of thousands of which have been sent to Hubei to contain the virus.

Senior Chinese central bank officials sought to ease global investors’ worries about the potential damage to the world’s second-largest economy from the outbreak, saying interest rates would be guided lower and that the country’s financial system and currency were resilient.

Chen Yulu, a deputy governor of the People’s Bank of China, said policymakers had plenty of tools to support the economy, and were fully confident of winning the war against the epidemic.

Slideshow (4 Images)
“We believe that after this epidemic is over, pent-up demand for consumption and investment will be fully released, and China’s economy will rebound swiftly,” Chen told state television.

China has recently cut several key lending rates, including the benchmark lending rate on Thursday, and has urged banks to extend cheap loans to the worst-hit companies which are struggling to resume production and are running out of cash.

The transport ministry said businesses would resume operations on a larger scale later this month and said more roads, waterways and ports were returning to normal.

Online media and Weibo users posted footage and images on Saturday of some malls reopening, including in the cities of Wuxi, Hangzhou and in Gansu province, with shoppers queuing in near-empty streets outside for mandatory temperature checks as trickles of customers in masks perused luxury goods shops and makeup counters.

Some analysts believe China’s economy could contract in the first quarter from the previous three months due to the combined supply and demand shocks caused by the epidemic and strict government containment measures. On an annual basis, some warn growth could fall by as much as half from 6% in the fourth quarter.

However, transport restrictions remain in many areas and while more firms are reopening, the limited data available suggests manufacturing is still at weak levels, with disruptions starting to spillover into global supply chains.

Samsung Electronics (005930.KS) said on Saturday that one coronavirus case had been confirmed at its mobile device factory complex in Gumi, causing a shutdown of its entire facility.

Finance leaders from the Group of 20 major economies were set to discuss risks to the world economy in Saudi Arabia this weekend.

The WHO’s Tedros on Twitter said 13 priority countries in Africa had been identified for help because of their direct links to China or high travel volume. That would include 30,000 personal protective kits on the way to six countries and 60,000 more for 19 states in the weeks ahead.