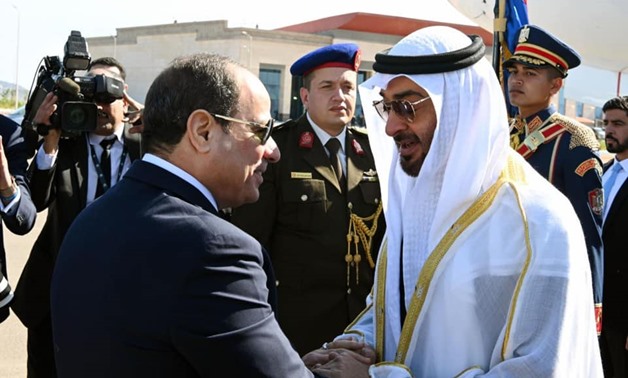 The festival was attended by tribal leaders and locals who have raised posters to welcome both leaders.

The racing festival on Thursday will witness the participation of 52 camels from Egypt, which will run for four kilometers during the race. The festival is set to last until Sunday.

Earlier this month, the United Arab Emirates has sent Egypt a batch of camels from one of the breeds as a present for racing. Head of the Egyptian Camel Racing Federation Eid Hamdan told Egypt Today that the eight camels were sent to contribute to reproducing camels for racing.

He stressed that this batch of camels is considered effective and will achieve a strong economic return for camel owners. He hailed the role of the UAE in supporting Egyptian camel racing as a sport.

The camel racing in Egypt’s Sharm El-Sheikh will take place with the participation of camels from South Sinai, North Sinai, Ismailia, Suez, The New Valley, Upper Egypt, Cairo and Giza.

Saleh Abu Mohammed, head of the Camel Club in South Sinai's Nuweiba said in November that the support of the UAE, represented in its Camel Racing Federation, had provided an opportunity for Egyptian camels to show their strength in competition, while keeping pace with the modern trend in camel races through using the riding robots.