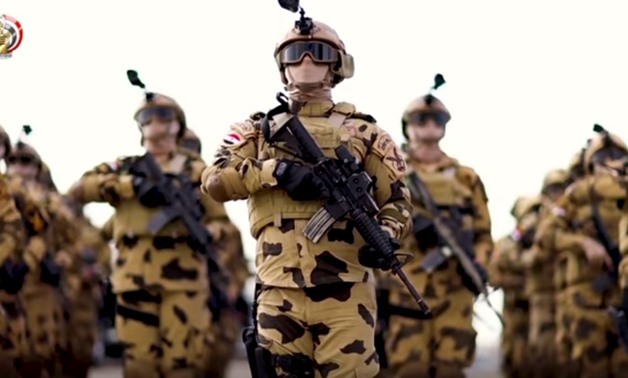 CAIRO – 14 January 2020: Egypt’s Second and Third Field Armies executed on Friday several combat activities in cooperation with the main branches of the General Command of the Armed Forces as part of Qader 2020 drills.

According to the spokesperson of the Egyptian Armed Forces, Tuesday, the training activities began with raising the combat readiness, alignment and inspection of the participating elements.

Egypt’s Second Field Army executed a number of raids on terrorist’ shelters in North Sinai, intensifying security measures in tunnels, crossings and ferries, and along the navigational course of the Suez Canal and the Mediterranean coast in cooperation with the air and naval forces.

The statement added the Third Army Forces carried out several raids on terrorists’ hideoutsin Central Sinai, while continuing to secure the navigational channel of the Suez Canal and the tunnel of martyr Ahmed Hamdi, securing the coasts of the Gulf of Suez and the Gulf of Aqaba in cooperation with the air and naval forces. This is in addition to securing vital tourist destinations in Central and Southern Sinai.

Forces of the central military region raised levels of combat readiness, which included the lineup of the participating forces and the implementation of “the strategic loading and opening procedures”.

The statement added that the southern military region raised the levels of readiness and implemented a tactical project with in corporation with Sudan and Libya, as part of the drills.

Egypt’s Air Forces also participated in the drills though carrying out several attacks.
On Sunday, the spokesperson announced that The Northern Military Region (NMR) has conducted a number of drills in Qader 2020 maneuver in cooperation with the Naval Force, the Special Forces, and the Border Guards.

As part of Qader 2020, which includes land, naval and air exercises, the NMR units carried out a drill on securing the Mediterranean coast to counter a hostile naval force in coordination with the other military branches as Mohamed Naguib Military Base in Matrouh took control of the management and operations, according to a Sunday statement. The large base was inaugurated in July 2017.