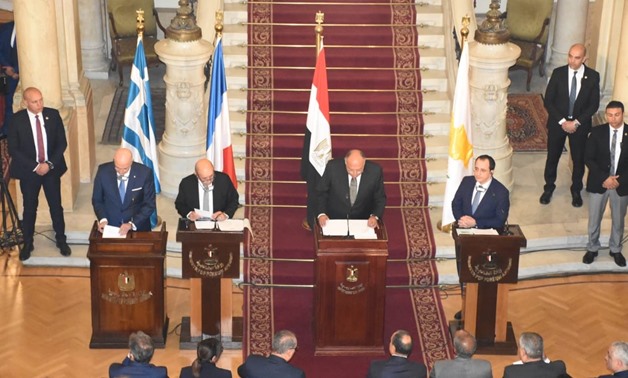 CAIRO – 9 January 2020: As foreign ministers of Egypt, France, Cyprus and Greece met on Wednesday in Cairo to discuss regional developments, they agreed on the need to find a comprehensive political settlement to the Libyan issue, according to a closing statement published by the Egyptian Foreign Ministry.

The ministers affirmed that the MoUs have further undermined regional stability and that they are both considered “null and void.” Foreign ministers of Egypt, France, Cyprus and Greece meet in Cairo to discuss regional developments – Press photo
The Turkish-Libyan maritime demarcation deal in the Mediterranean Sea violates the sovereign rights of the other nations, and does not comply with the Law of the Sea and cannot have any legal effect, the ministers agreed.

They also affirmed the necessity to fully respect the sovereignty of all countries, including their sovereign rights in their water regions in the Mediterranean Sea. In this regard, they strongly condemned the continuous Turkish acts (drillings) in Cyprus’ Exclusive Economic Zone and regional waters and called on Turkey to immediately halt illegal exploration activities.

The ministers considered the security deal or any decision to send forces to Libya a serious violation of UN Security Council Resolution 2259 and other relevant Security Council resolutions, and a threat to regional security and stability. They called for an immediate de-escalation.

Shoukry, Le Drian, Dendias, and Christodoulides voiced their deep concerns concerning recent Turkish violation of international law in the Eastern Mediterranean and expected Turkey to act responsibly. They also affirmed the need for cooperation among Mediterranean countries with good intentions and in a constructive way to ensure the safety and stability of the region on the basis of international law.

A comprehensive political settlement is the only way to resolve the Libyan crisis and restore stability in Libya, the ministers agreed, according to the statement. They affirmed their full commitment to seek a political solution and their keenness to prevent escalation in the war-torn country. In this regard, they voiced support to the Special Representative of Secretary-General (SRSG) in Libya, Ghassan Salame, the UN initiatives, and the Berlin process. Foreign ministers of Egypt, France, Cyprus and Greece meet in Cairo to discuss regional developments – Press photo
The ministers affirmed willingness of their countries to intensify bilateral cooperation, with the aim of achieving prosperity for their peoples. They also urged continuous coordination with regard to their stances and procedures aiming to achieve security and stability of their countries and the Eastern Mediterranean, including counter-terrorism efforts.

The ministers also agreed on the necessity to give priority to regional cooperation and comprehensive economic developments which is the aim of all countries of the region, in accordance with international law. Achieving development will contribute to reaching regional stability and prosperity, the ministers affirmed.

Finally, they agreed to continue coordination and to hold their next meeting in Greece’s largest island of Crete.