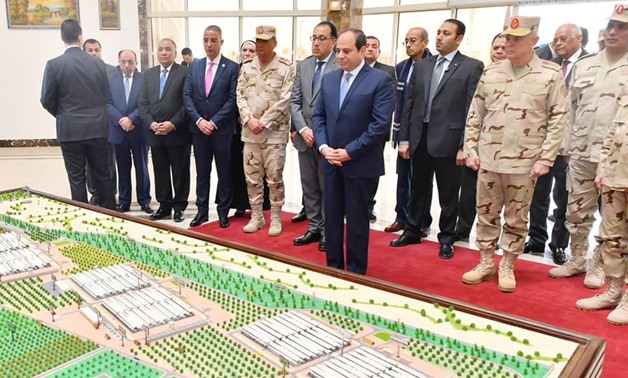 CAIRO - 26 December 2019: President Abdel Fatah al-Sisi said that the various animal production projects that the government began to implement 3 years ago aim to achieve a balance in the local market to maintain prices and prevent their rise.

Sisi’s remark came during the opening of an animal production complex in Fayoum, Upper Egypt on Wednesday as part of the major national projects plan witnessed in various fields.

The president said that the Egyptian universities, in cooperation with the Ministry of Agriculture, should develop new strains of meat and milk in order to benefit citizens and small farmers within the framework of the Egyptian State's efforts in this field.

President Sisi stressed that this plan aims to produce all dairy products, even those that are imported from abroad, which was also emphasized by Director General of the National Projects Authority Mustafa Amin, who stressed that Egypt will open two factories, in coordination with the Ministry of Health, for all different dairy products at the end of 2020, such as all kinds of cheese, children's milk.

For his part, President of the National Animal Production Company, Fayez Abaza, said that an administrative infrastructure has been prepared for these projects in coordination with all the concerned authorities such as the Egyptian universities, the Ministry of Agriculture and relevant international organizations.

Meanwhile, Sisi said that the State is interested in upgrading the efficiency of lakes for enhancing their production, adding that the current state of Lake Qaroun, whose space reaches 50,000 feddans, is unacceptable.

"The State is seeking to clean up and restore the condition of all lakes to increase their production and promote their services," Sisi said.

The president underlined the necessity of increasing the fish production from lakes through upgrading their efficiency. "This would cost a lot of money," said the president, adding that the revenue from these lakes will not be realized soon but after four or five years from the start of their restoration and development.

According to a statement issued by Foreign Ministry spokesperson Ahmed Hafez, the Animal Production Complex aims to reduce the food gap in animal protein and works to provide it with quantities, quality, and prices appropriate for the citizen.

The president affirmed that one of the basic tasks of the Armed Forces is to preserve the constitutional path, the civilization of the state and its democracy and prevent its downfall, saying: "According to the constitution, the Armed Forces are responsible for preserving the civil state in Egypt. They are responsible to keep the state from falling.”

"The issue is how the government can manage these facilities," Sisi noted.

Earlier, Fayoum governor announced that the implementation of these projects will be carried out in cooperation with the National Service Projects Authority of the Armed Forces.

The governor stated that the animal production complex accommodates 18,000 heads of cattle for breeding and fattening on an area of 450 acres, in addition to the automatic slaughterhouses that accommodate 320 heads on an area of 20 acres.

These vital projects come in the areas of animal and dairy production, agricultural production, food commodities and petroleum products at the governorate level, to increase national product, meet citizens' needs and provide job opportunities for youth.