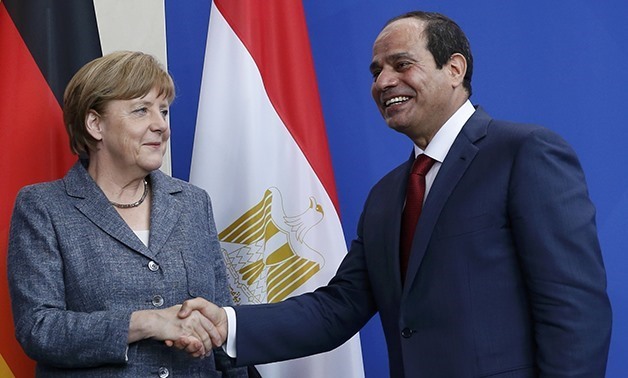 CAIRO - 19 December 2019: President Abdel Fattah El Sisi along with German Chancellor Angela Merkel affirmed on Thursday their keenness on the unity and stability of Libya.

During a phone call between the two leaders, Sisi stressed on Egypt's stance towards the unity, stability and security of Libya, and its support for efforts to combat terrorism and extremist groups and militias that represent a threat not only to Libya but also to the security and stability of the entire Middle East and Mediterranean region.

According to the presidential spokesperson, Bassam Rady Sisi added, “Illegal external interference in Libyan affairs must be ended.”

Rady said that the telephone call also dealt with bilateral relations in the light of the growing ties between the two countries, noting that Merkel expressed Germany's keenness on developing relations with Egypt while president Sisi voiced hope for pushing forward Egyptian-German relations.

On Tuesday, Egypt delivered a message to the UN Security Council regarding the situation in Libya and especially the recently signed memorandum of understanding with Turkey.

"The memorandum of understanding signed by Turkey and Libya violates Security Council resolutions on Libya, especially resolution 1970 of 2011," Egypt stated in its message.

Ambassador Mohamed Idris, Egypt's permanent representative to the United Nations, said that the MoU also allows the transfer of weapons to militias west of the country, stressing that this MoU is a violation to Skhirat Political Agreement on Libya.

Egypt has condemned the signing of the two memoranda of understanding on security and maritime jurisdictions by Turkey and Libya shortly after the signing was announced.
“Egypt affirms that such memoranda possess no legal effect, as they cannot be recognized in light of the fact that Article 8 of the Skhirat Political Agreement on Libya, widely accepted by Libyans, defines the competences conferred to the Council of Ministers, expressly stipulating that the Council of Ministers as an entity – and not the president of the council alone – has the power to conclude international agreements,” Egyptian Foreign Ministry spokesperson Ahmed Hafez said in a statement.