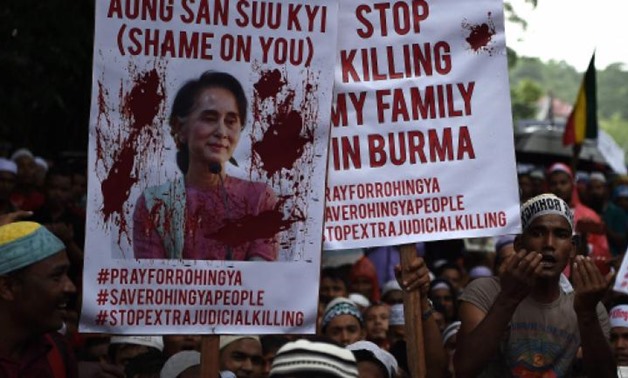 Ethnic Rohingya Muslim refugees hold placards, many with portraits of Aung San Suu Kyi and shout slogans during a protest against the persecution of Rohingya Muslims in Myanmar, outside the Myanmar Embassy in Kuala Lumpur on Friday. AFP/MANAN VATSYAYANA

Investigators working for the United Nations’ human rights agency said Monday Myanmar’s army chief and other top commanders should be prosecuted for genocide against the country’s ethnic-Rohingya Muslims.

Addressing a bench of 17 judges from around the world, 74-year-old Aung San Suu Kyi, blamed the conflict on an uprising by separatist insurgents.

Her speech to the UN’ highest tribunal came on the second day of an emergency legal hearing convened to consider whether protective “provisional measures” should be imposed to prevent further killings and destruction in Myanmar.

The charge that Myanmar’s military carried out mass murder, rape and destruction of Rohingya Muslim communities has been raised by the Gambia.

Speakers for Gambia detailed the evidence gathered by the UN and other groups that security forces shot hundreds of Rohingya in their homes, killed children and infants, and gang-raped women during a military campaign in 2017.

More than 700,000 Rohingya were forced to flee Myanmar for neighboring Bangladesh as a result of the campaign, which forms a major part of the genocide case.

“I stand before you to awaken the conscience of the world and to arouse the voice of the international community,” said Abubacarr Tambadou, Gambia’s justice minister, who was a prosecutor in cases relating to the Rwandan genocide of the 1990s and is leading his country’s lawsuit against Myanmar. “We ask: Why? Why is the world standing by and allowing such horrors again in our lifetime?”

Myanmar’s government has dismissed reports of mass violence and accused the U.N. fact-finding team and human rights groups of being biased and exaggerated.

Gambia filed the case on behalf of the 57-nation Organization of Islamic Cooperation, which says its mission is to protect the interests of Muslims. The court is expected to rule on the issue of provisional measures within 30 days of the close of the hearings, according to Paul Reichler, a lawyer for Gambia in the case.