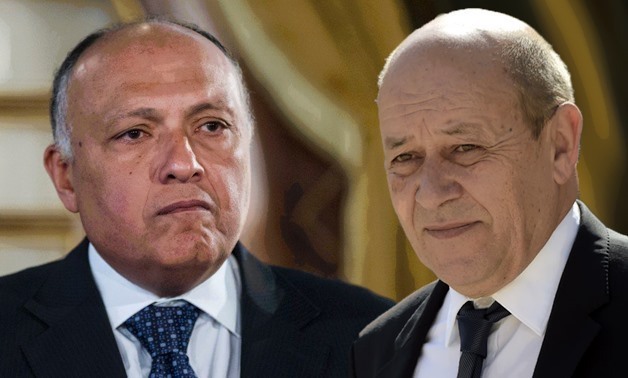 CAIRO – 5 December 2019: The foreign ministries of Egypt and France have agreed on the illegality of the MoUs on maritime borders and security signed between Turkey and Libya’s Prime Minister Fayez Al-Sarraj as it violates international law, an official statement read.

The security cooperation deal between Turkey and Sarraj, the prime minister of the so-called Government of National Accord and also chairman of the presidential council, violates the Skhirat agreement signed in 2015 between parties of conflict in Syria, under the supervision of the United Nations, and the Security Council resolutions which imposes a ban on the supply of weapons and military equipment to and from Libya, according to the statement.

Egyptian Foreign Minister Sameh Shoukry and his French counterpart, Jean-Yves Le Drian affirmed the need to reach a comprehensive political settlement to the Libyan crisis within the framework of talks on Libya in the German capital of Berlin, which aims at achieving de-escalation and re-imposing ceasefire in the war-torn country.

They also affirmed the need to back Libya’s state institutions and the Libyan parliament, the elected legislative body, take decisive steps to face militias and terrorist groups, and work on ending the military conflict in Libya and activating the political path toward free elections.

Le Drian, for his part, invited Shoukry to visit France during the upcoming weeks, particularly in January, to continue consultations and coordination.

The two ministers discussed fields of cooperation between Egypt and France, in light of the firm relations between the two countries. They also agreed to continue consultations and to exchange visits to enhance bilateral cooperation, especially in economic, commercial and investments fields.

Shoukry, during the meeting, expressed condolences days after two French helicopters collided during a military counter-terrorism mission in Mali. French President Emmanuel Macron on November 26 said 13 French troops had been killed in the accident.

Egyptian President Abdel Fattah al-Sisi in August this year met with France’s President Emmanuel Macron, on the sidelines of