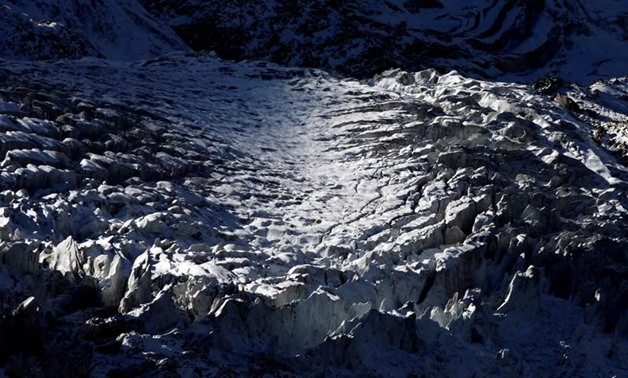 FILE PHOTO: Seracs are pictured at the Bossons glacier in the Mont-Blanc massif on a sunny autumn day in Chamonix, France October 8, 2019. REUTERS/Denis Balibouse/File Photo

The COP25 - which is the actual Conference of the Parties to the UN Convention on Climate Change, UNFCCC - is organized by King Felipe VI of Spain.

The conference is meant to find quick solutions to stop the surging global temperatures which are expected to rise by two Celsius by the year 2100, according to a statement issued by the Environment Ministry on Sunday.

Negotiations set to be conducted during the conference aim at outlining ways of overcoming the impact of the fast-paced climate change that are jeopardizing the planet.

Minister Fouad asserted the importance of the negotiations towards reaching a consensus among nations on efforts of confronting the climate change.

According to the UN, the world is already 1.1°C warmer than it was at the onset of the industrial revolution, and it is already having a significant impact on the world, and on people’s lives. And if current trends persist, then global temperatures can be expected to rise by 3.4 to 3.9°C this century, which would bring wide-ranging and destructive climate impacts.