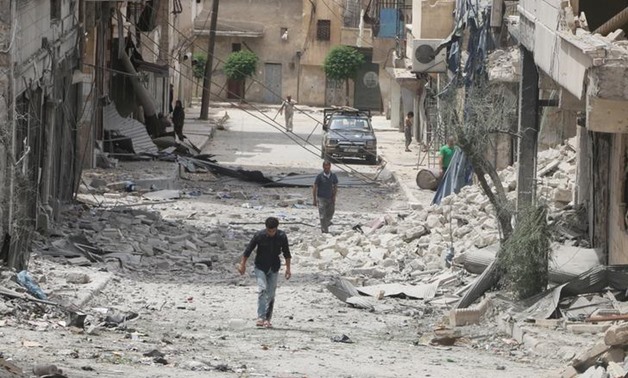 FILE- People walk on the rubble of damaged buildings after an airstrike in the rebel held area of Aleppo's Baedeen district, Syria, May 3, 2016.

By: MENA
NEW YORK - 21 November 2019: The UN said that the humanitarian situation throughout Syria remains dire, with more than 11 million people in need of assistance and over 6 million people displaced.

"We are particularly concerned over the safety and protection of some 3 million people in Idlib and surrounding areas of the north‑west of the country, including some 1.6 million internally displaced people," according to a press briefing released by the office of Spokesperson for the Secretary-General Stéphane Dujarric.

Since the end of October, an increase in airstrikes and shelling has impacted dozens of communities in Idlib, Hama, Aleppo and Latakia governorates.

Since hostilities began in late April, the Office for the High Commissioner for Human Rights (OHCHR) has verified over 1,000 civilian casualties as a result of hostilities, hundreds of them children.