Sisi back in Cairo after talking cooperation in Berlin, boosting ties 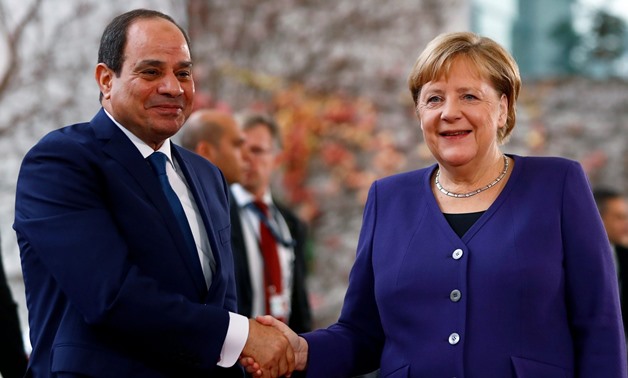 CAIRO – 21 November 2019: President Abdel Fattah El-Sisi arrived in Cairo on Wednesday evening after he concluded his official visit to Berlin during which he attended the G20 Compact with Africa (CwA) and met with Chancellor Angela Merkel.

Since the CwA’s launch in 2017, 12 African countries joined the initiative including Benin, Burkina Faso, Côte d’Ivoire, Egypt, Ethiopia, Ghana, Guinea, Morocco, Rwanda, Senegal, Togo and Tunisia, according to the official website of the initiative.

Sisi and German President of the Bundestag Wolfgang Schäuble tackled international efforts of counterterrorism and the illegal migration issue at the Bundestag headquarters in Berlin on Monday, said Egyptian Presidential Spokesperson Bassam Radi in a statement. Meeting Sisi on Monday at Belle Vue presidential headquarters, German President Frank-Walter Steinmeier commended the pivotal role played by Egypt to boost stability in the Middle East and Africa, especially with regard to combating illegal migration and terrorism. Sisi stressed on Monday Egypt’s willingness to boost the exerted efforts in the car manufacturing sector, during a meeting with Mercedes-Benz’s vice president Eckart von Klaeden.

Sisi said that Egypt is seeking to attract more investors in this field, especially after the country’s implementation of the economic reform program.

He added during the meeting attended by Minister of Investment Sahar Nasr that Egypt is open to cooperate with Mercedes-Benz in light of the well-known German experience in this field.

Both sides discussed Mercedes-Benz’s upcoming strategy regarding cooperating with Egypt to develop Public transportation with its various means and vehicles. The opening of the CwA

Sisi gave a speech at the opening of the CwA on Tuesday, during which he said that development in Africa will have its impact on the Mediterrenean region and will achieve mutual interests.

“As protectionism is ascending and slowdown of global trade is arising, African states are likely to suffer the most, particularly in light of problems like debts, poverty, climate change, and diseases. Africa’s location, resources, continental free trade agreement, and rise of intra-continental trade still make it an attractive investment destination,” Sisi stressed. Sisi received in his residence in Berlin German Defense Minister Annegret Kramp-Karrenbauer as they agreed to reinforce channels of consultation and coordination over regional matters of mutual interest and supraregional impact.

Sisi expressed Egypt’s eagerness “to extend cooperation with Germany in the fields of security, countering terrorism, and combating illegal migration in light of the major challenges facing the Middle East.”

On her side, Kramp-Karrenbauer expressed her appreciation for the growth in Egyptian-German relations, and the intensive coordination between both countries during the meetings of Sisi and Merkel.

On the sidelines of the CwA, Egypt’s Minister of Investment Sahar Nasr and her German counterpart, Gerd Müller, signed €300 billion agreements on Tuesday. Sisi expressed his aspiration to develop prospects for cooperation with Germany in the field of basic and technical education, during his meeting with German Minister for Economic Cooperation and Development Gerd Müller on the same day.

Sisi said that Egypt is keen on benefiting from the German education system. On Wednesday, Sisi met with Chancellor Merkel, during which the latter praised the two countries' relations and cooperation, describing it as “unprecedented.”

During the meeting, Sisi affirmed that combating terrorism and extremist ideology with the aim of achieving security and stability is part of human rights that each state must guarantee through actual practices on the ground. Germany's Economy Minister Peter Altmaier expressed his country’s appreciation to the bilateral relations with Egypt in the economic field, and voiced readiness for further bilateral cooperation, in a meeting with Sisi.

Sisi, for his part, hailed the special level of relations between Egypt and Germany in various fields, which allows further bilateral cooperation especially in the economic aspect.

Heads of many leading German companies hailed Sisi’s personal and periodical review of the measures taken to facilitate the work of German companies in Egypt, during a meeting with the Egyptian president attended by Altmaier.

The heads of the companies praised the remarkable growth of the Egyptian economy, sponsored by the efforts and procedures adopted by the Egyptian government in this regard. They referred to the implementation of giant national projects, which can make Egypt a significant developmental partner at the international level.

Sisi, for his part, expressed keenness to enhance bilateral relations of economic cooperation with German businessmen and companies, within a framework of mutual interests between the two countries.

The president also referred to a number of huge investment projects implemented in Egypt including the Suez Canal Area Development Project, which includes many major industrial and logistic areas.