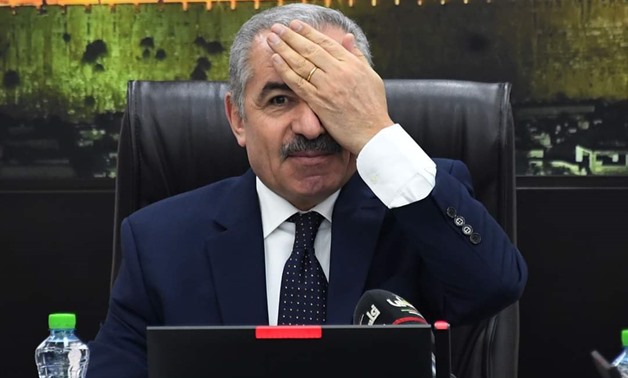 Photo posted by Palestinian Prime Minister Mohamed Shtayyeh on his Facebook page on November 18, 2019 to express solidarity with photojournalist Muath Amarneh whose left eye was shot by Israeli forces while covering clashes.

CAIRO - 19 November 2019: Palestinian Prime Minister Mohamed Shtayyeh expressed his solidarity with photojournalist Muath Amarneh, saying “If the occupation wants to shut the left eye of Muath, the eyes of all of us are his.”

“Israel targets journalists to silence the voice of Palestine and the voice of truth. It was not enough to assassinate the eye of Muath Amarneh; they also savagely assaulted journalists backing him yesterday in Bethlehem. We salute the wide popular support to journalist Amarneh. We second that (move) and we want it to expand to communicate the voice of Palestine to the world. Also, light must be shed on the victims of the occupation. The latest of those is the Sawarka family whose house was shelled by the occupation killing eight men, two women, and five children. That is in addition to 26 martyrs who fell because of aggression against Gaza,” the Palestinian prime minister posted on his Facebook page on Monday. Muath Amarneh, 32, lost his left eye last Friday while documenting the clashes that occurred between Israel Border Police and Palestinians in Soref located northwestern Al-Khalil city, southern the West Bank occupied by Israel. Tens of Palestinians have been protesting for more than two weeks against the confiscation of lands belonging to Soref by Israeli authorities.

“After clashes had started, I was standing on the side while wearing the bullet proof jacket having the word ‘press’ and the helmet,” Amarneh told AFP while lying in a hospital and his eye covered with patch.

“Suddenly, I felt that something hit my eye. I thought it was a rubber bullet. I moved my hands in front of my eyes but could see nothing so I understood that a bullet hit my eye and that I lost sight,” Amarneh added.

The photojournalist explained that a two-centimeter fragment bullet penetrated his eye and lied a few millimeters from the brain. His cousin, Tarek, stated that Amarneh should have undergone a surgery to remove the fragment lying behind the eye but it was not possible as that could cause damage to the right eye or brain hemorrhage.

Palestinian journalists initiated online and offline campaigns to express solidarity with Amarneh, launching #MuathEye hashtag and posting their photos with their left eyes covered with patches. They also organized sit-ins in a number of cities in the West Bank.

In Bethlehem, Israeli forces dismantled a sit-in by journalists near a military roadblock northern the city injuring seven, according to the Palestinian Ministry of Health. Amarneh, who grew up at Dheisheh Refugee Camp southern Bethlehem, affirms he was deliberately shot because he is a journalist, asserting that targeting journalists has become dominant and ugly.

“The soldiers of occupation impeded my arrival to the protests site on Friday but one of them was on the ground and told the other mockingly let him go,” Amarneh stated, saying he believes that same soldier was the one who shot him.

The Freedoms Committee at the Palestinian Press Syndicate announced that 600 violations against Palestinian journalists have been recorded since the beginning of 2019 until November 1, including 60 live round injuries.

In Tulkaram city, around 250 journalists took part in a sit-in showing solidarity with Amarneh. “We demand an international investigation into all crimes against Palestinian journalists and not just into the case of Muath,” journalist Mein Shedid said.

The Palestinian Ministry of Information described what happened to Amarneh as “a persecution of truth guards,” accusing Israel of “disregarding all international laws.” Videos and photos of Amarneh bleeding right after he had been shot and his colleagues trying to clear him from the place went viral on social media.