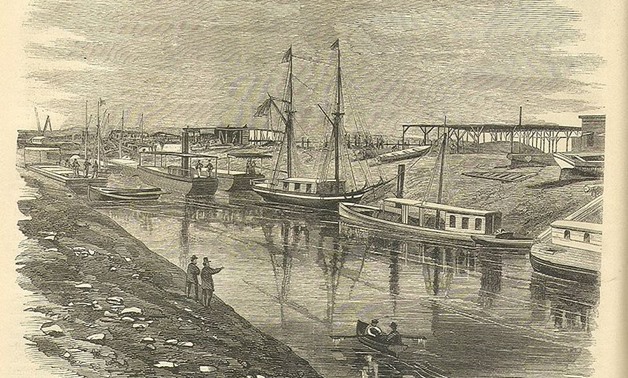 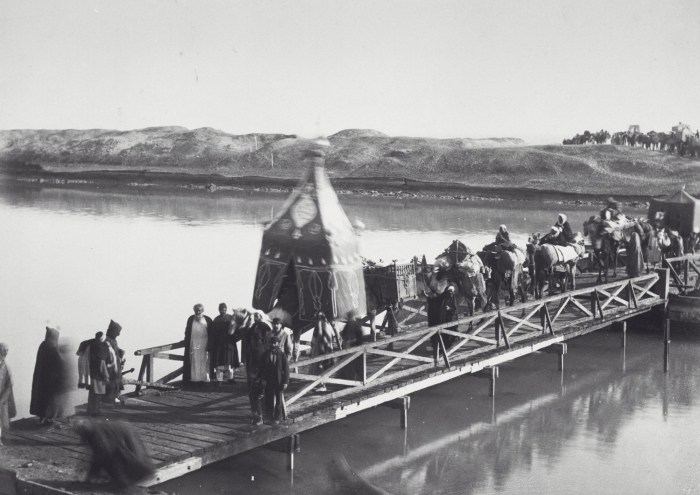 A caravan crossing the Suez Canal

A painting of a ferry crossing the Suez Canal
The following are key facts on the canal:

- The Suez Canal is an artificial double waterway extending over 193 kilometers and connecting the Mediterranean Sea and the Red Sea.

- Vertically, the canal is divided into eastern and southern sections of Bitter Lakes, while horizontally, it is cross cut by double passages.
- The canal saves ships 15 days compared with Cape of Good Hope.

- The idea of digging up the canal rose for the first time amid the advent of French Campaign in Egypt and Syria in 1798.

- In 1854, Ferdinand de Lesseps persuaded Khedive Said of embarking on the project and was granted the Suez Canal digging and operation concession for 99 years. Painting of workers digging the Suez Canal in the 19th century
- A lavish inauguration ceremony was held and attended by royal guests. - In 1905, the foreign company running the canal attempted to extend the concession duration for 50 years but failed. Modern Photo of the headquarters of the Suez Canal Authority

- In July 1956, late President Gamal Abdel Nasser nationalized the canal. The response to the decision was the tripartite aggression by Britain, France, and Israel. However, they retreated due to international pressure and popular resistance.

- The canal was shut down for more than 8 years because of the Six-Day War in 1967 and was reopened by late President Anwar al-Saddat in 1975 after resolving the conflict with Israel and achieving ceasefire following October 6, 1973 War. The northern exit of the Suez Canal The Southern entrance of the Suez Canal

- Since 1980, the Suez Canal has been enlarged several times to reduce the time spent by ships while crossing, most recently after the inauguration of the New Suez Canal (a parallel canal) on August 6, 2015. The differences in Suez Canal depth over the years
- Some 8-12 percent of global trade passes through the Suez Canal.

- The canal’s investment zone called SCzone houses 192 enterprises worth $25 billion. The target is to achieve $55-billion investments in the zone within 15 years, offering a total of a million jobs. El Ferdan Railway Bridge spanning the western shipping lane of the Suez Canal near Ismailia. It is the world’s longest swing bridge with a span of 1,100 feet. A dredger owned by the Suez Canal Authority