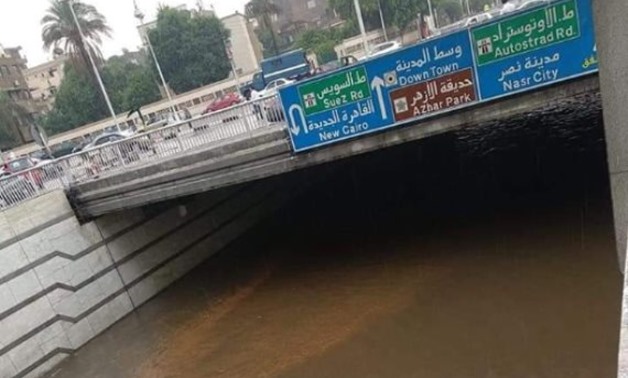 CAIRO – 23 October, 2019: All storm sewers “function well,” but the traffic crisis that occurred Tuesday night in eastern Cairo resulted from the large amount of rain that fell in such a short period of time, said the Holding Company for Drinking Water and Sanitation.

Head of the company, Mamdouh Raslan, said some 650,000 cubic meters of rainwater fell on Nasr City and Heliopolis, an amount that surpasses the capacity of the available storm sewers.

Rainwater suction equipment and vehicles have been distributed in streets a day before the rain fell, Raslam added, but the precautions were still unable to counter the large quantity of rainwater.

All head of water companies were supervising the drainage processes themselves, he continued, emphasizing that an additional supply of rainwater pumps and suction equipment was sent to these two districts from Giza and Qalyubia, which did not suffer as much rain.

Water companies will stay in an emergency state until the rainwater wave ends, which is expected to continue until Friday.

Early on Wednesday, rainwater suction vehicles and equipment were seen on Cairo main roads, overpasses and bridges to ease traffic and prevent accidents.

The spots flooded with rainwater have been reported to the Traffic Administration, which coordinated with the Holding Company for Drinking Water and Sanitation to flush the rainwater out to protect cars from sliding.

Cairo in general, but eastern Cairo in particular, is notorious for poor infrastructure that manages rainwater. Almost every winter, at least one day comes where people are unable to return to their homes for many hours, being stuck in jammed, flooded streets without food or a sanitary means to go to the toilet.

As a consequence, social media is also flooded with complaints from people who had to wet their clothes up until the knees to cross the street, families who are worried about their hungry children whose school buses have been stuck for hours, pictures of flooded streets and tunnels, as well as jokes and photoshopped images of boats sailing in famous streets.