All Nile Valley countries have a right to economic development and prosperity, the White House statement said

CAIRO – 10 September 2019: The Arab Republic of Egypt has welcomed the White House statement regarding the ongoing negotiations on the Renaissance Dam, an official Saturday statement said.

A While House press statement has said the United States supports Egypt, Ethiopia, and Sudan’s ongoing negotiations to reach a cooperative, sustainable, and mutually beneficial agreement on filling and operating the Grand Ethiopian Renaissance Dam.

“All Nile Valley countries have a right to economic development and prosperity,” according to the White House statement. “The Administration calls on all sides to put forth good faith efforts to reach an agreement that preserves those rights, while simultaneously respecting each other’s Nile water equities.”

Egypt, through the statement, looks forward to a positive U.S. role in this regard, especially in light of the negotiation deadlock between the three countries over four years since direct negotiations regarding the agreement on Declaration of Principles in 2015 in Khartoum.

The statement further added that since negotiations did not achieve any tangible results, an effective international role is needed to overcome the current stalemate in negotiations, bring the view of the three countries closer, and to reach a fair and balanced agreement based on respect for the principles of the international law governing the management and use of international rivers, which allows countries to benefit from their water resources without harming the interests and rights of other countries.

“The state of Egypt echoes President Abdel Fattah El Sisi’s speech at the United regarding Egypt's openness to all international mediation effort to reach the required agreement,” the statement added. 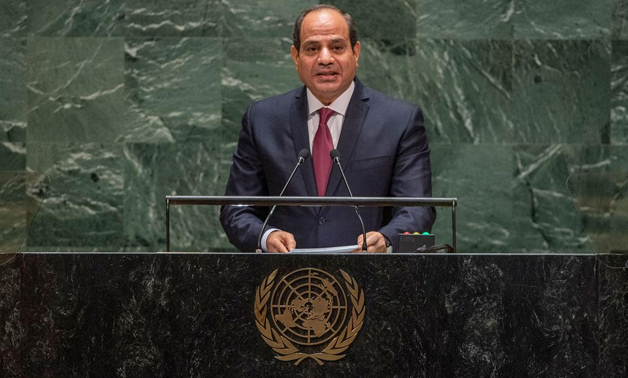 A new round of meetings of the irrigation and water resources ministers of Egypt, Sudan and Ethiopia kicked off in Khartoum on Friday to continue the talks on the technical issues around the filling of the dam.

The ministers discussed during their two-day meetings proposals on filling the dam and the outcome of meetings of the three-way technical committee that has reviewed the issues over four days.

The technical committee's discussions focused on proposals by the three parties about filling and operating the dam.

The latest round of talk between the two countries took place in Khartoum in September, with Sudan also seeking clarification over the dam, which will source water from the River Nile that each of the three countries rely on for water supplies.