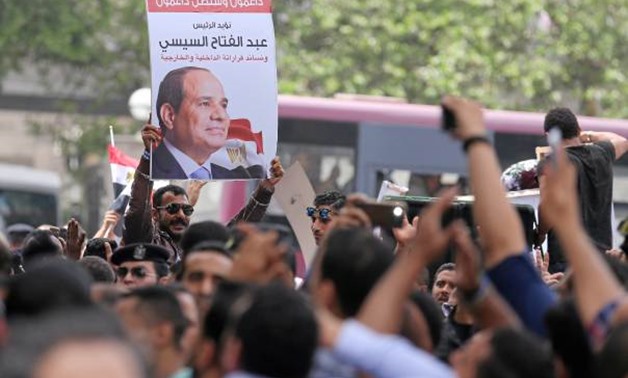 FILE - Protesters hold poster of Egyptian President Abdel Fattah al-Sisi in front of the Syndicate of Journalists, in Cairo, Egypt May 4, 2016 - Reuters

CAIRO – 27 September 2019: Many members of the Egyptian community in Germany will celebrate on Saturday, the 40th anniversary of the fraternity agreement between Cairo and Frankfurt, Middle East News Agency reported.

The community members will use such occasion to reiterate their support to Egypt's president, amid pro-Muslim Brotherhood calls to organize unlicensed protests aiming to topple the regime, said Gerges Tous, an official in an Egyptian union in Frankfurt.

The celebration will be held in the presence of Khaled Taha, the Egyptian consul in Frankfurt and a number of officials from different German cities.

"We take this celebration to renew support for President Abdel Fattah al-Sisi and our country and express our support, as Egyptians living abroad, to our country, Egypt, against any attempts [seeking] to harm stability and the path of development," Tous stated.

"We send a message of love to our beloved Egypt, the country that lives inside us despite the distance. We continue to offer our best to exchange relations between our beloved homeland and the countries we live in, so we are celebrating the 40th anniversary of the fraternity between Cairo and Frankfurt."

"We seek, through these festivities, to provide ways of social, scientific and medical exchange. Also, in the fields of tourism, we organize delegations of Germans to visit the tourist, religious and archaeological sites of Egypt, to return to their state and convey an honorable image of our country."