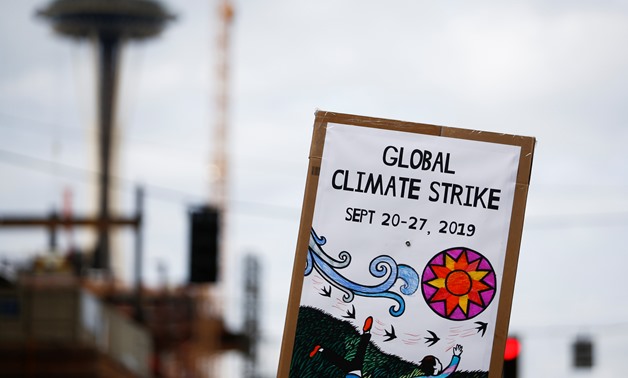 A tech worker holds a climate strike sign with the Space Needle seen in the background during a Climate Strike walkout and march in Seattle, Washington, U.S. September 20, 2019. REUTERS/Lindsey Wasson

CAIRO – 23 September 2019: Egypt and the United Kingdom will co-chair a coalition on climate adaptation and resilience at the 2019 Climate Change Summit due to kick off on Sept. 23 upon a call by UN Secretary-General Antonio Guterres at the 74th Session of the UNGA meetings in New York.

The Egypt-UK coalition aims to raise funds to implement the resilience and adaptation strategies that address climate change impacts. The coalition was announced on June 30, 2019 by Egyptian Minister of Environment Yasmine Fouad during a ministerial meeting held at Abu Dhabi on climate change.

“Resilience and adaptation are among the top priorities for the developing countries which are vulnerable to the negative impacts of climate change. Since the beginning of its work with the UK, Egypt has been keen to represent the developing countries’ viewpoints, especially African countries, in the preparatory meetings,” said the Egyptian Ministry of Environment in a statement on Sept. 22.

Over the past few months, the coalition held discussions on the content of the political declaration that will be presented during the summit. The declaration will stress the necessity of fund-raising directed to efforts to adapt to the negative impacts of climate change to build resilience and resilience in developing countries, and promote technology transfer, the statement said.

Copies of the political declaration were sent by Egyptian and UK embassies to the political leaders of developing and developed countries alike, and to the heads of the boards of directors of companies, international institutions, banks and development agencies, international financial institutions, scholars and other parties, the statement added.

The Egypt-UK coalition is one of nine coalitions formed by world governments, civil societies and concerned international bodies. The nine coalitions were formed to tackle the following actions: social and political drivers of change; transition to renewable energy; industry; infrastructure, cities and local action; nature-based solutions; resilience and adaptation; mitigation; finance and carbon pricing; and youth and citizen mobilization, according to the SDG Knowledge Hub.

On September 22, a closed meeting was held for heads of states, governments and ministers of the nine coalitions and the UN secretary general to review the results achieved by each coalition over the past months. On the following day, the summit will officially kick off and last for four hours to review the national plans chosen by the secretary-general according to his assessment; then initiatives of the various coalitions will be reviewed for about two hours. They will also discuss their future plans for their gathering in 2020.

Guterres has asked the world leaders to focus on four demands, namely No New Coal; Net Zero On 2050; No Fossil Fuel Subsidies; and Make Polluters Pay. In June 2019, the UK passed a law, per which the kingdom will commit to targeting its strategy of net zero emissions by 2050, according to a statement from the UK government.

Climate Change Cation summit was called by UN Secretary-General Guterres after the issuance of the Intergovernmental Panel on Climate Change (IPCC) latest report on “Climate Change and Land,” which called for tacking a fast action towards climate change impacts.

Protests around the globe

Two days ahead of the climate change summit, millions of people took to the streets around the world, calling for taking an action to save the planet. The protests broke out in Europe, Australia, Asia, Africa, and the Americas and were inspired by 16-year-old Swedish environmental activist Greta Thunberg, who called her government to take an action and sign the 2015 Paris Accord that aims to prevent the increase of global warming above 2°C by 2100.

Th global warming was mainly caused by the industrial revolution in the 18th century. According to NASA’s latest data on climate change, carbon dioxide has currently reached 411 parts per million and the Arctic ice melts by 12.8 percent per decade.

The International Panel on Climate Change (IPCC) issued a report in October 2018 saying that limiting the global warming to 1.5°C rather than 2°C would “ensure more sustainable and equitable society.”

Taking legal actions, the United Nations launched in 1992 its Framework Convention on Climate Change (UNFCCC) which aimed to curb the human interference into the climate system. Three years later, Kyoto Protocol which binds the developed countries [the causes of industrial revolution] to cut their shares of global greenhouse gases via investing eco-friendly projects in developing countries was signed.