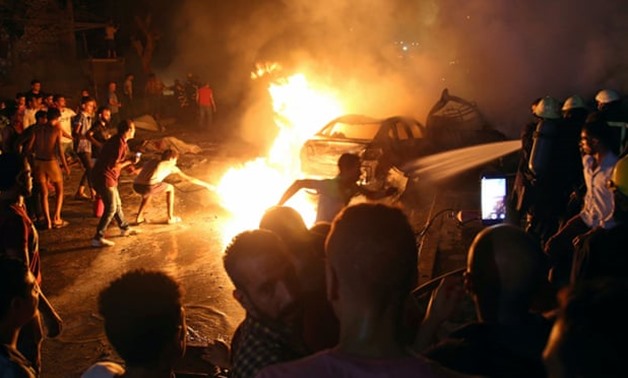 Civilians try to extinguish a fire from the blast outside the hospital. Shokry Hussein/Reuters

CAIRO – 20 September 2019: Police investigation revealed on Friday the involvement of the Muslim Brotherhood in a terrorist operation that triggered an explosion outside a cancer hospital in central Cairo.

The blast took place at mid-night in early August outside Egypt’s National Cancer Institute, killing 20 and injuring at least 47.

Sources told Egypt Today that police forces have managed to arrest two new culprits who communicated with the perpetrator of the attack.

Both defendants were previously detained for violent crimes and joining a terrorist organization.

Pictures were taken after the incident showed two burnt cars, with at least one completely blackened and destroyed from the force of the explosion.

The Interior Ministry has said a car carrying explosives drove into oncoming traffic and collided with three others, detonating its charge.

The sources further added that the terrorist name was Abdul Rahman Khaled Mahmoud, aged 24 years old. However, investigations revealed that he jumped of the car moments before the explosion, but still got injured from the impact of the explosion, which left enough DNA evidence for the police to identify him.

Investigations added that the Muslim Brotherhood terrorist group has taken new methods in issuing mandates from abroad to form organizations inside the country, providing financial resources to its members, and assigning them to carry out hostile actions, leading to the overthrow of the existing regime in the country.

It is noteworthy that the terrorists used around 150kg of TNT and other highly explosive materials for the attack.

Preliminary investigation led the police forces to two locations were Hasm terrorist hide in both of Fayoum and Cairo governorates.

During storming the first shelter of the terrorists In Fayoum, the criminals tried to target the police forces by explosive devices; however after exchanging fire with them, eight terrorist elements were announced killed.

The second shelter of terrorist was in Shorouk neighborhood northeast of Cairo. After storming the location by the security forces and exchanging fire with the criminals, seven terrorists were announced killed.

Number of guns and automatic rifles up to 10 were found in both shelters along with other explosives devices.