In Pics: Amazon rainforests on fire 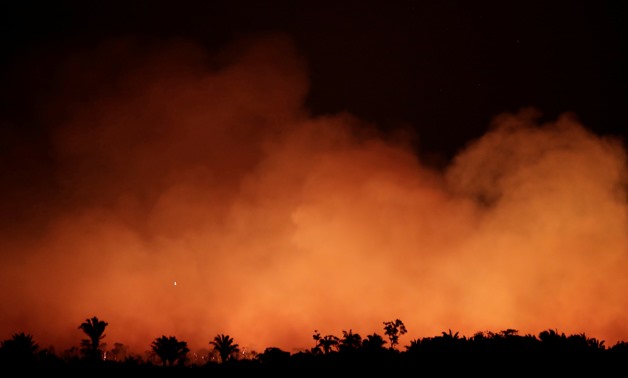 CAIRO – 22 August 2019: For more than two weeks, the world’s largest rainforests of Amazon have been burning.

US Space agency NASA said on Twitter on Thursday that the Amazon fires this season are record-breaking, publishing an image for the first taken by Suomi NPP satellite two days ago.

Smoke from wildfires in the #AmazonRainforest spreads across several Brazilian states in this natural-color image taken by a @NASAEarth instrument on the Suomi NPP satellite. Although it is fire season in Brazil, the number of fires may be record-setting: https://t.co/NVQrffzntr pic.twitter.com/4JTcBz9C8f

Brazilian President said in a press conference on Wednesday that NGOs are blamed on burning Amazon rainforests to “embarrass” his government, The Guardian reported. A tract of Amazon jungle is seen burning as it is being cleared by loggers and farmers in Iranduba, Amazonas state, Brazil August 20, 2019. REUTERS/Bruno Kelly


Amazon is the largest tropical rainforests all over the world and home of 33 million people, including 420 indigenous communities, according to the United Nations Food and Agricultural Organization (FAO). Smoke billows during a fire in an area of the Amazon rainforest near Porto Velho, Rondonia State, Brazil, Brazil August 21, 2019. REUTERS/Ueslei Marcelino

According to the National Geographic, the forests are inhabited by 40,000 plant species, 1,300 bird species, 430 mammals, 2.5 million insects, and 3,000 species of fish.
Social media users on Twitter created a hashtag #PrayForTheAmazon, reacting to the devastating rainforest fires.


Amazon Forest which provide almost 20% Oxygen is burning but no one cares #PrayForTheAmazon pic.twitter.com/gWIArC0WpY


I didn't have right to command everyone to take action but I just wanna ask to pray little harder Earth is Amazing Guyss. #PrayForTheAmazon pic.twitter.com/qWYgWl4eYt

The ongoing devastating fires participate in increasing the rate of carbon dioxide into air although some countries have moved to plant billions of trees to to help curb carbon dioxide emissions globally and limit the impacts of climate change. A study was published by Science in July and revealed that the universe has to cultivate 1 billion hectares of trees to limit the impacts of climate change.