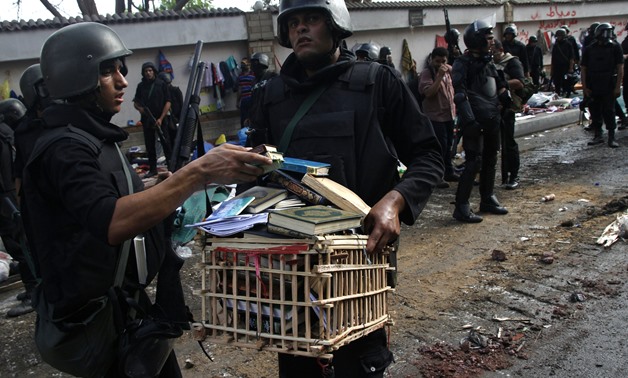 CAIRO – 14 August 2019: Since Rabaa and al-Nahda sit-ins dispersal in August 2013, the outlawed Muslim Brotherhood group has been exposed through a series of scandalous sound leaks that shed some light on the Muslim brotherhood devious mindset and ethics.

In May 2016, an audio leak for the late member of the outlawed Muslim Brotherhood’s guidance bureau, Mohammed Kamal, emerged, in which he urged the members of the guidance bureau to resign and leave their posts for another new leadership, stating that he gave up all his executive posts to set an example for the rest of the members.

The late member was assassinated by the outlawed group in the same year for his call.

In April 2018, another sound leak surfed the social media platforms to expose the role of Moataz Matar, a broadcaster known for supporting the outlawed group through Turkey-based Al-Sharq news channel. The leak was linked to the unjustified dismissal of the channel employees due to the corruption and foul actions of dissident politician Ayman Nour and Moataz Matar.

Another sound leak circulated the Internet in November 2018 before being removed and deleted by the outlawed Muslim brotherhood exposed the involvement of a senior Muslim Brotherhood member and a fugitive in Turkey in homosexual relations in the capital city of Istanbul. The senior member known as Ibrahim Ismail was reported to use his political leverage in order to persuade young men into having a relationship with him.

The outlawed Muslim Brotherhood resorted to the financial support provided by some neighboring countries in order to shake the stability and the security of Egypt, their dishonest tactics were exposed by a sound leak that emerged in April 2019, in which a fugitive member of the terrorist group who lived in Libya was talking about a plan funded by thousands of dollars to create fake social media pages that induce the masses to take to the street through fabricated news and rumors.

The member of the outlawed Muslim Brotherhood guidance bureau, Amir Bassam, who fled to Turkey out of fear of legal persecution was the hero of a sound leak that appeared to surface in July 2019. Bassam in the sound leak exposes the financial corruption and the thefts among the Muslim Brotherhood senior members such as the terrorist group’s secretary-general Mahmoud Hussein.