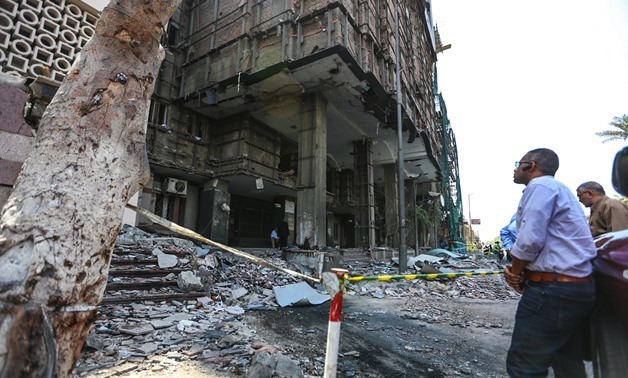 CAIRO - 8 August 2019: A number of officials condemned the silence of some human rights organizations after the blast that took place on August 4 in Cairo, officially killing 22 people, and injuring 47 others.

The terrorist attack on the National Cancer Institute has targeted not only innocent civilians but patients treated from serious diseases, Nasry said, stressing that the attack violates international covenants and protocols.

He also censured some countries and organizations, which have a political dispute with the Egyptian state, for not condemning such a terrorist attack, noting that in some cases, they link terrorist attacks with violations of human rights in Egypt.

Some international human rights organizations cooperate with organizations affiliated to the outlawed Muslim Brotherhood group, despite knowing the clear dispute between the state and the Islamist group.

Dalia Ziada, director of Egypt's Liberal Democracy Institute, condemned the fact that many international human rights organizations published a statement of Hasm movement, while denying any links to the recent attack.

Hasm movement, believed to be affiliated with Muslim Brotherhood group, was held responsible for the attack by the Egyptian Ministry of Interior.

Ziada told Egypt Today that publishing Hasm's statement is like defending them although the Interior Ministry has officially blamed the bombing on them.

She said that such behavior raises questions about the amount of funding these organizations receive from Qatar to defend a terrorist organization.

"The silent human rights organizations are sponsors of terrorism and work for the Muslim Brotherhood," MP Sami Ramadan said, asserting that the Egyptian people are "confident that their political leadership will eliminate terrorism."

In March, after a video showed a terrorist blowing himself up when two police officers got their hands on him in Cairo's al-Darb al-Ahmar, a parliamentarian said that respecting human rights is behind not shooting Al-Hassan Abdullah.

Parliament's Human Rights Committee member Mohamed al-Ghoul said that the incident slams all allegations issued by some suspicious human rights organizations that try to stain the image of the Egyptian police and frame terrorist groups as victims.
“The rights to live safely, and enjoy freedom of expression are inseparable and are highly valued by Egypt. Terrorism, racism, and hate crimes are rising in Europe and the (Middle East) region. However, that should not obstruct us from assuming development,” President Abdel Fatah al-Sisi said in a joint press conference with French President Emmanuel Macron in Cairo in January 2019.