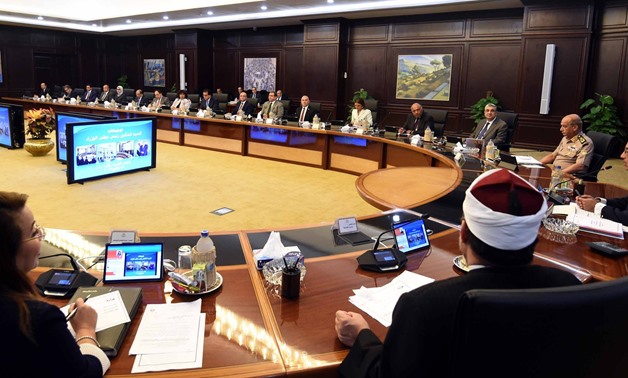 CAIRO – 25 July 2019: Prime Minister Mostafa Madbouli said that the new projects that have been established in New El Alamein city during the past period indicate that the government is walking on the right path.

During the government’s first meeting in Alamein city, Madbouli affirmed that most of the massive projects that have been achieved were finished in nearly two years, and discussed with government the details of those projects.

Madbouli said that Alamein city is expected to be considered as Egypt’s second capital.
He also referred to the graduation ceremony of the new batches of the Military Academy and the Technical Institute for Military Forces on July 22 which was attended by President Abdel Fatah al-Sisi, saying that these ceremonies enhance the Egyptians' trust in a secured future for the country.

He also said that he feels proud to see the Egyptian youth willing to defend and protect their country.

The cabinet held its weekly session under the chairmanship of Prime Minister Mostafa Madbouli on Wednesday to discuss political, economic and social files.

The ministers discussed a number of draft laws and ministerial decisions aimed at achieving economic and social stability and encouraging investments.

The ministers also reviewed the projects that have recently been implemented.

On March 11, 2017, President Sisi issued a decree to form a committee headed by presidential Aide for National and Strategic Projects Ibrahim Mahlab to study allocating thousands of feddans of state-owned land for the New Alamein City project in Marsa Matrouh governorate. The project was first announced in 2014.

The decree also allocated 7,268 feddans of coastal lands along the Alexandria – Marsa Matrouh road for the New Alamein city. The New Alamein city will include a national university that comprises a number of applied science faculties, an opera house, a library and a museum; it is designed to include 5,000 housing units to accommodate more than 400,000 inhabitants.

With the government allocating $59.6 billion from the state budget for the developmental and infrastructural needs of the project, the first phase of the project was inaugurated by President Sisi on March 1, 2018.

The New Alamein city has caught the eyes of the world, with many calling it the “New Riviera”, and others citing it as a must go location.