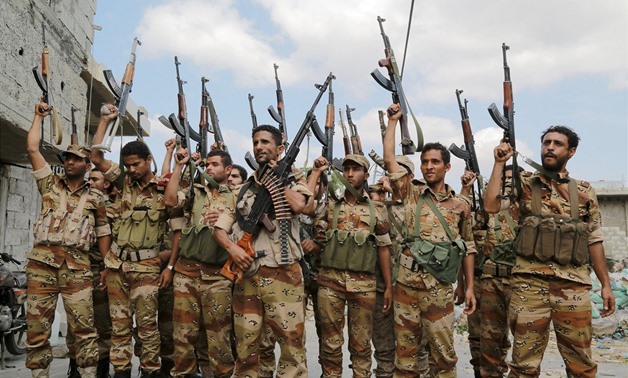 Around 10 of the Houthi rebels were killed and several others injured as a result of the ongoing fighting in al-Bayda, said the statement - Reuters

CAIRO – 13 July 2019: Yemeni security forces have managed to capture a number of military sites from the Houthi rebels in the central province of al-Bayda.

According to Yemeni news outlets, the armed forces launched an attack on the Houthi militiamen and managed to liberate a number of key military sites in the mountainous areas in Natea front located to the north of al-Bayda province."

According to the government statement revealed by Saba, "the battles with Houthis rebels are still ongoing amid large on-ground progress achieved by the army forces in al-Bayda."

Around 10 of the Houthi rebels were killed and several others injured as a result of the ongoing fighting in al-Bayda, said the statement.

Residents based in the area said that warplanes of the Saudi Arabia-led coalition bombed Houthi controlled sites and caused hug explosions in al-Bayda.

On Thursday, hours of intense armed confrontations between the pro-government forces and the Houthi rebels in Qanya in the east of al-Bayda left seven government soldiers dead.

Yemen has been locked into a civil war since the Iran-backed Shiite Houthi rebels overran much of the country militarily and seized all northern provinces, including the capital Sanaa, in 2014.

Saudi Arabia has been leading an Arab military coalition that intervened in Yemen in 2015 to support the government of President Abd-Rabbu Mansour Hadi after Houthi rebels forced him into exile.

The United Nations has listed Yemen as the country suffering the world's top humanitarian crisis, with 7 million people on the brink of famine.