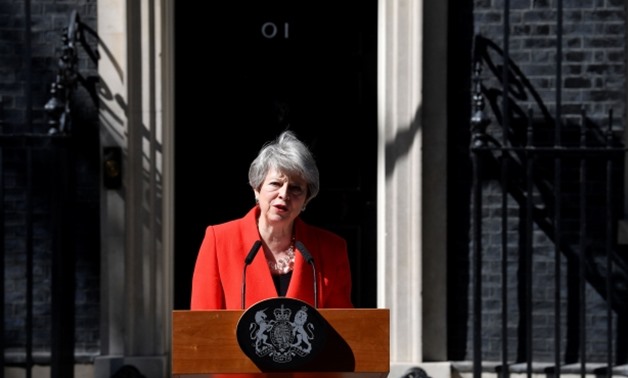 British Prime Minister Theresa May reacts as she delivers a statement in London, Britain - Reuters

LONDON (Reuters) - The toughest job for Britain’s next prime minister will be to leave the European Union.

But the new leader will have few options: find a divorce deal that parliament will ratify, leave without a deal or delay.

Legally, Britain leaves on Oct. 31, seven months later than planned, unless the EU agree to a further delay and parliament changes the exit date written in law.

The favorite is Boris Johnson, a leading figure in the 2016 Brexit campaign who is promising that Britain will leave the EU on Oct. 31 with or without a deal.

So, how could Johnson do it?

1. NEGOTIATE A NEW DEAL
Johnson wants to go back to Brussels to seek changes to a two-part exit deal which May agreed in 2018, but which parliament has rejected.

The EU is adamant that the most contentious part of the deal - the Withdrawal Agreement setting out a post-Brexit transition period - cannot be reopened. It has repeated this stance and says it would not change its mind for a new leader.

Johnson argues that the EU will return to the table if Britain prepares properly for a no-deal Brexit, thereby making it a credible threat that would also affect EU prosperity.

His rival for the job, foreign minister Jeremy Hunt, also wants to negotiate a new deal, but would be willing to delay Brexit beyond Oct. 31. He has said his negotiating skills would be enough to persuade the EU to reopen talks.

Any renegotiated deal would need to win a majority in Britain’s 650-seat parliament, where the ruling Conservative Party does not command a majority and is split over the best way to deliver Brexit.

To have any hope of getting a deal over the line, Johnson would need to satisfy a group of up to 80 dedicated Brexit supporters who want a clean break with the EU. But he will also have to make sure he doesn’t upset a smaller group of pro-EU Conservatives who want to retain closer ties.

Any new deal would also need the support of the Northern Irish Democratic Unionist Party (DUP) whose 10 votes prop up the minority Conservative government.

2. NO DEAL
Johnson has said if negotiations fail, he would not seek a delay to Brexit beyond Oct. 31.

That means Britain would leave the bloc without a single formal transition arrangement covering everything from post-Brexit pet passports to customs arrangements on the Northern Irish border.

Eurosceptics, including Johnson, say proper preparation can negate the worst effects while allowing Britain the political and economic freedom to prosper in the long term.

Hunt has not ruled out leaving without a deal, but says it would be a last resort.

A majority of lawmakers have previously voted to try to block a no-deal exit, but leaving without a deal would not require ratification by parliament.

Nevertheless lawmakers would be expected to use flexibility in Britain’s constitution to try to find a way to stop it happening.

To avoid this outcome, the prime minister could suspend parliament until after Oct. 31. A radical step known as ‘prorogation’, which would attract fierce criticism and trigger a constitutional crisis.

Johnson has not publicly ruled out a prorogation; Hunt has said it would be a “profound mistake”.

Some Conservative lawmakers have threatened to resign from the party and vote against their leader to prevent a no-deal exit and topple the government. It would take only a handful of Conservatives votes in favor of a no confidence motion to trigger the collapse of the government.

3. DELAY
If there is no deal in sight, but the next prime minister is unable or unwilling to follow through with a no-deal Brexit, the only option would be to seek a further delay.

Britain has already sought two delays from the EU, and a contingent led by France’s Emmanuel Macron is lobbying against any further extension. A decision to grant a further delay would need the support of all EU member states.

To get such an extension, the EU would likely insist on a detailed plan from Britain on how it intends to break the domestic political deadlock. Possible justifications could be a second referendum on leaving the EU, or a general election.

Johnson and Hunt are against a second referendum.

4. GENERAL ELECTION
Without a deal or a willingness to delay Brexit for a third time, Britain’s leader could move to dissolve parliament and call a new national election - seeking re-election and a new mandate for their preferred course of action.

An election can be triggered in two ways. Firstly, if two thirds of lawmakers agree to a government proposal; or if a majority of lawmakers vote that they have no confidence in the current government and no alternative government is agreed.

Brexit Party leader Nigel Farage has suggested he could support Johnson in an election if he pledged to go for a no-deal Brexit.

5. QUIT OR TOPPLED
A prime minister unable to deliver or delay Brexit and unwilling to call an election would have few options left. They could resign, as May did, without triggering a general election.

If it cannot, an election follows.