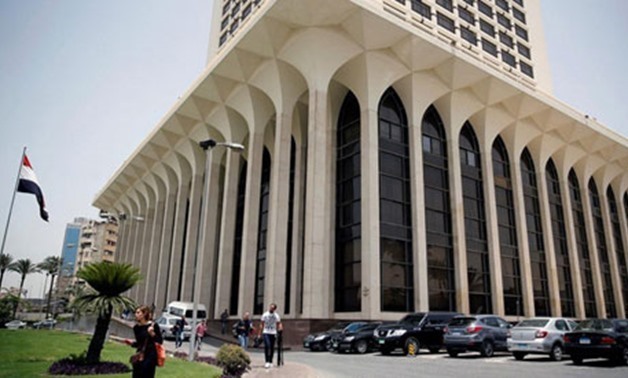 CAIRO - 19 June 2019: The Foreign Ministry strongly denounced statements published by the spokesperson of the Office of the High Commissioner for Human Rights on Mohamed Morsi's death during his trial in an espionage case, describing the statements as an attempt to deliberately "politicize" a normal death.

According to a statement issued by spokesperson of Foreign Ministry Ahmed Hafez on Wednesday, he pointed out that such statements are not appropriate to be released by an international organization.

He also denounced the content of the statements which implied doubts that aim at undermining the State's institutions and neutrality of the Egyptian justice.

Hafez's statement asserted that such attempts are malicious claims to undermine Egypt's commitment to international standards and jumping to fake conclusions without giving any valid evidence.

"Such remarks are completely unacceptable especially in view of Egypt's specific measures that have already been applicable by the Egyptian authorities out of its full commitment to and respect of international treaties," the statement added.

Hafez asserted that Egypt is well aware that such "politicized" statements come in line with statements made by officials in a certain country and entities that seek to take advantage of the issue for political purposes.

This country is claiming to respect democracy and human rights, while its actions and practices are just aiming to keep its powers by all possible means; the regime of this country has turned it into a large prison, the spokesperson added.

He further noted that this country is detaining tens of thousands of its opponents and members of the civil society without holding anyone accountable for stealing their freedom of expression. Additionally,this country is sponsoring thousands of terrorists who are operating in the region and are involved in killing thousands of innocent people with the aim of achieving political gains.

The Foreign Ministry spokesperson also asserted that such remarks by the spokesperson of OHCHR will be debated at the highest levels in Egypt to consider its objectivity,violations and deviations in breach of all norms of professionalism and neutrality that should be applied by an international body.

In the same context, the State Information Service criticized on Tuesday tweets made by the Human Rights Watch on Morsi’s death.

“Human Rights Watch’s tweets on Morsi’s passing represent nothing but political exploitation in the name of Human Rights.

In a new ethical low for Human Rights Watch, Sarah Leah Whitson, director of the Middle East and North Africa division of HRW, published a number of tweets on her account regarding the circumstances of the passing of the deposed president, Mohamed Morsi. Whitson’s tweets contained nothing but false claims that reaffirm HRW's tradition of circulating lies."

The allegations made by the tweets were as follows:

1. Whitson accused the Egyptian government of causing the death of the deceased deposed president through "criminal negligence" by not providing him with adequate healthcare. She also used the deceased president’s passing to give credence to such claims and apply them broadly to all inmates serving sentences in Egyptian prisons.

4. The deceased deposed president submitted his last official request to the court regarding his health condition on November 19th, 2017 asking to be treated on his own expense and the court approved his request. This further demonstrates how false Whitson’s allegations really are.

The conclusions that Whitson has reached in her tweets are nothing but an attempt to prematurely reach outcomes with the most politicized intentions. Furthermore, HRW has reached a new low by attempting to take advantage of the death of an Egyptian citizen to make political statements, and unfounded criminal accusations that have no relation whatsoever to human rights work. Morsi, 67, who died from heart attack on Monday, according to preliminary medical assessment had received continuous medical care, and his health condition had not been ignored, a medical official said. The medical source added that the prison had cooperated with a number of hospitals to serve Morsi and look after his condition.

Morsi was the leader of the Muslim Brotherhood Organization, which was designated by Egypt, Saudi Arabia, the United Arab Emirates, Bahrain and Russia as a terrorist group.