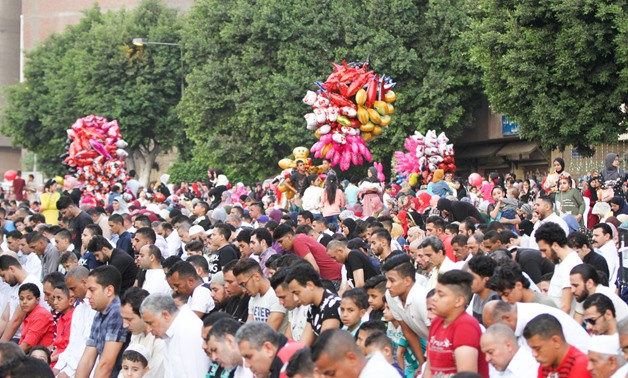 CAIRO – 5 June 2019: Egyptians have different habits and traditions to spend first day of Eid al-Fitr; however, all habits aims eventually at family gatherings, celebrations and taking some time off marking the end of the holy month of Ramadan.

The first day usually begin with performing Eid prayers at the Mosque. The prayers considered to be an integral religious part of Eid of which Muslims all over the world are keen on it. After the prayers some Egyptians earthier head to public gardens to celebrate or to prefer family gatherings of which families’ youngest members can enjoy Eidi.
Eidi, or as we usually call it (Ediea), is one of the most joyful customs during Eid. Elders in families including fathers, uncles, grandfathers and mothers give an amount of money as a gift to the youngsters.

Giza zoo is one of the most common place of which some families choose to spend their time during Eid. According to the Zoo head, Mohamed Ragae’i, nearly 72.000 visitors flocked to the Zoo during Eid’s first day. Fustat garden
Fustat garden is one of the National gardens that Egyptians choose to spend their Eid with a very low cost for the ticket price. Some Egyptians headed to Rod al-Farag Axis Bridge (TahyaMisr Bridge) which received on May 15 a Guinness World Records' certificate as the widest suspended bridge in the world with a width of 67.36 meters.

Rod El-Farag Axis (TahyaMisr Bridge) links areas in northern and eastern Cairo with west Cairo. The Egyptian government said that the bridge, which aims to ease traffic and reduce commuting time, is the widest over a waterway.

Visit the graves of their loved ones


Despite not being one of the most pleasant traditions, but some Egyptians prefer to go and visit the graves of their loved ones, and placing roses near them.