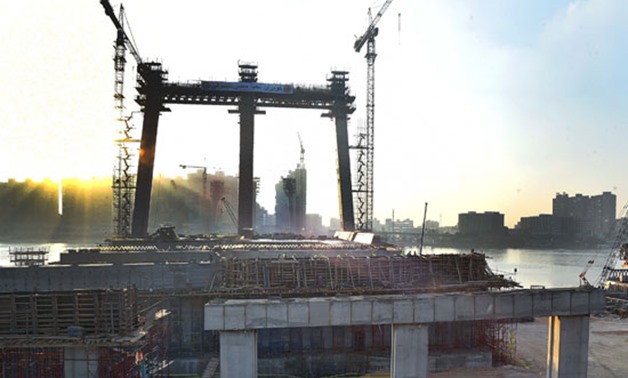 CAIRO - 15 May 2019: Egypt received on Wednesday a Guinness World Records' certificate on Rod al-Farag Axis Bridge (Tahya Misr Bridge) passing over the Nile, for being the widest suspension bridge in the world at a width of 67.36 meters.

Guinness World Records website has not yet published news about the new Egyptian record-holder.

Regional Director for the Guinness World Records in the Middle East and North Africa region Talal Omar handed over the certificate to Mohamed Mohsen Salah, President and CEO of Arab Contractors company.

The Arab Contractors, a leading construction company in the Middle East and Africa, officially requested that Rod El-Farag Axissets a record in the Guinness Book of World Records, said Ahmed Makled, chief executive manager of B Premium, the official partner of Guinness Records in Egypt.

Rod El-Farag Axis(TahyaMisr Bridge) links areas in northern and eastern Cairo with west Cairo. The Egyptian government said that the bridge, which aims to ease traffic and reduce commuting time, is the widest over a waterway.

Port Mann, which has a width of 65 meters, was opened to traffic in 2012. California's Bay Bridge was then opened in 2013, to replace Port Mann as the world's widest. The aforementioned San Francisco-Oakland Bay Bridge has a width of over 78 meters.

Makled said that the TahyaMisr Bridge willseek to enter the Guinness World Records in the coming few daysafter it is officially inaugurated.

The construction of the flyover bridge is 100 percentcompleted, said Salah, the CEO of the Arab Contractors, adding that the bridge has been paved.

As many as 4,000 engineers, technicians and other workers have contributed to the construction of the bridge with a cost of LE 5 billion ($292.7 million), Salah said, adding that the second phase of the project costs LE 4 billion.