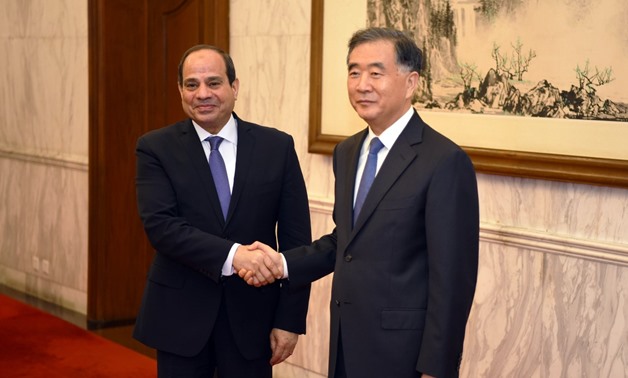 CAIRO - 25 April 2019: Egypt's President Abdel Fatah al-Sisi met on Thursday with Wang Yang, chairman of the National Committee of the Chinese People's Political Consultative Conference (CPPCC) and a member of the Standing Committee of the Central Political Bureau of the Communist Party of China.

The CPPCC is one of China's major institutions responsible for monitoring the implementation of laws and regulations in China, and following up on policies, and political, economic, cultural, and social national policies, presidential spokesman Bassam Radi said.

During the meeting, Yang referred to the historical and extended friendship between Egypt and China and between their peoples. He also stressed his country's keenness to develop bilateral cooperation with Egypt at various levels, especially as the North African country is witnessing a developmental and economic renaissance, Radi said.

President Sisi lauded the development of the historical bilateral relations between Egypt and China which have reached a "comprehensive strategic partnership." He affirmed that Egypt is always seeking to upgrade its relations with China in all fields, and expand and diversify the different cooperation frameworks.

The President welcomed the second Belt and Road Forum as it contributes to supporting bilateral cooperation and coordinating relations between the two countries, and in the African continent and the Arab countries. He expressed the hope that the initiative will lead to an increase in the volume of international trade as well as the Suez Canal traffic, according to Radi.

Sisi affirmed Egypt's firm policy of positive constructive interaction with all neighboring countries and the world in accordance with the principle of mutual respect, non-interference in others' internal affairs, and the recognition of the common interest.

Sisi also stressed the keenness to strengthen the parliamentary relations between the two countries, and expressed his aspiration to encourage Chinese companies to increase their investment in Egypt.