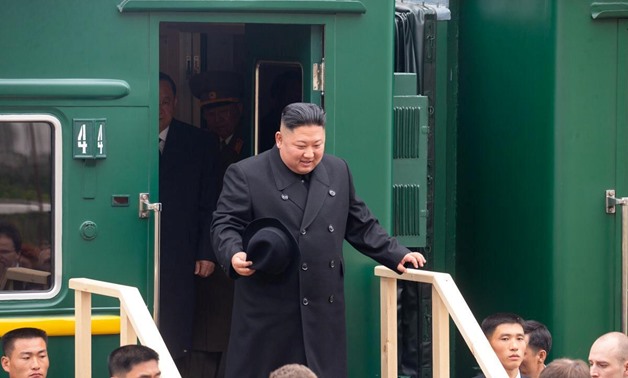 North Korean leader Kim Jong Un disembarks from a train during a welcoming ceremony at a railway station in the far eastern settlement of Khasan, Russia April 24, 2019. Press Service of Administration of Primorsky Krai/Alexander Safronov/Handout via REUTE

VLADIVOSTOK, Russia (Reuters) - North Korean leader Kim Jong Un arrived in the Russian city of Vladivostok on Wednesday for a summit he is likely to use to seek support from Russian President Vladimir Putin while Pyongyang’s nuclear talks with Washington are in limbo.

The armored train carrying Kim — on his first official visit to Russia — pulled into the quayside station in Vladivostok, on the Pacific Ocean, a few hours after crossing from North Korea into Russia.

After a brief delay while the door of Kim’s carriage was lined up with a red carpet laid out on the platform, the door opened and a smiling Kim stepped out.

Earlier, at a stop on the border, Kim told Russian state television he was hoping for useful and successful discussions with Putin.

“I hope that we can discuss concrete questions about peace negotiations on the Korean peninsula, and our bilateral relations,” he said through an interpreter.

Kim will sit down for talks with Putin on Thursday at a university campus on an island just off Vladivostok. It will be the first summit between the two leaders, and the standoff over Pyongyang’s nuclear program will top the agenda, according to a Kremlin foreign policy aide.

The meeting comes two months after a summit in Vietnam between Kim and U.S. President Donald Trump ended in failure, leaving the North Korean leader looking elsewhere for international support and relief from sanctions.

For Putin the summit is an opportunity to show that Russia remains a major global player despite being under sanctions itself over its intervention in Ukraine and allegations that it meddled in U.S. elections.

But analysts predicted that Kim is unlikely to emerge from the summit with any substantial promises of sanctions relief. The meeting is likely to focus more on showing camaraderie.

On arrival in the city, the North Korean leader reviewed an honor guard of Russian troops in a square in front of the train station, with bodyguards looking on. He removed his black fedora while a military orchestra played first the North Korean national anthem, then the Russian anthem.

After officials from the Russian and North Korean delegations exchanged handshakes, Kim climbed into a black limousine and drove off. About 10 North Korean security guards in black suits jogged alongside the vehicle for about the first 100 meters (yards) of its journey.

Russian media reported that Kim would be heading to Russky island, linked by bridge to the mainland part of Vladivostok, where the summit will take place and where he is also expected to be staying.

Artyom Lukin, a professor at Far Eastern Federal University in Vladivostok, said Kim would want to be seen as a world leader who has international interlocutors besides Washington, Beijing or Seoul.

“As for Russia, the Putin-Kim summit will reaffirm Moscow’s place as a major player on the Korean peninsula. This meeting is important for Russian international prestige,” Lukin said.

Putin held a summit in 2002 with Kim Jong Un’s father and predecessor, Kim Jong Il, who also met in 2011 with Dmitry Medvedev, the Putin lieutenant who was then Russian president.

The venue for the summit is a sports complex at the Far Eastern Federal University, which also played host in 2012 to an Asia-Pacific Economic Cooperation summit.

The sports complex at the university was closed on Tuesday and workers were seen bringing in furniture, a Reuters TV crew reported. Security guards at the entrance to the campus were searching vehicles as they drove in.