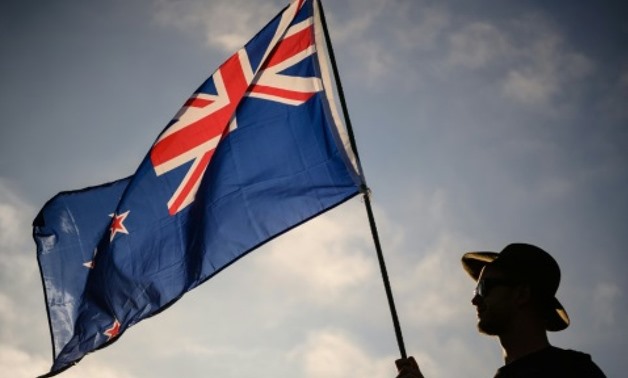 A New Zealand flag held at a vigil for the Christchurch mosque massacres. New Zealand has offered permanent residency to those directly affected by the attacks AFP/File

Wellington (AFP) New Zealand opened a two-year window Wednesday for people directly affected by the Christchurch terror attacks to apply to stay permanently in the country.

The special visa category "recognises the impact of the tragedy on the lives of those most affected, and gives people currently on temporary and resident visas some certainty" about their status, Immigration New Zealand said in a statement.

The definition of "immediate family" has been expanded to include a wide circle of family members including partner's family and the grandparents of children under 25.

Mustafa Farouk, the president of the Federation of Islamic Associations of New Zealand, said it was a generous gesture.

"We are very happy," he said, adding he expected everyone eligible would apply.

"Some of these people have not only lost their loved ones, they have also lost their main provider."

A self-styled white supremacist opened fire on Muslims at prayer in two Christchurch mosques on March 15.

Brenton Tarrant, a 28-year-old Australian" has been charged with 50 counts of murder and 39 of attempted murder.