In Pics: Indonesian community in Egypt vote in 2019 general elections 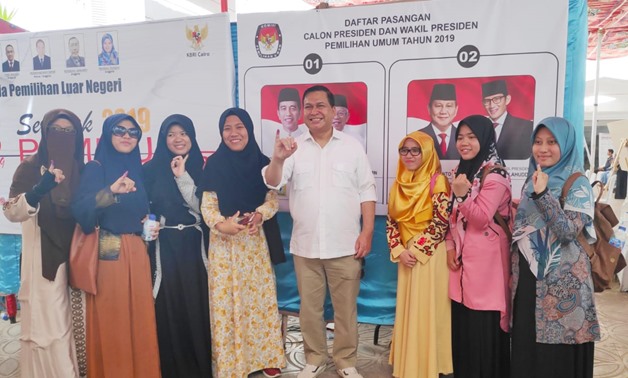 CAIRO – 13 April 2019: The Indonesian expatriates in Egypt headed to the embassy headquarter, downtown Cairo, to vote in the 2019 Indonesian general elections on Saturday.

It is the first time in the country’s history since independence in 1945 for the Indonesian people to vote in the general elections (presidential and legislative elections) on the same day to elect the president, vice president and members of the People's Representative Council of Indonesia (the parliament). “Voting process in the Cairo-based embassy has a celebrating atmosphere, and this reflects the high turnout of the voters,” said Indonesian ambassador Helmy Fawzy.

A total of 7,671 eligible voters in Egypt casted their ballots in 15 polling stations, said Mohamed Amin Abdel-Samad, head of the General Election Committee in Cairo, adding that 85 percent of the voters are students, who study al-Azhar University. He also noted that 50 percent of those students were added this year to the list of the eligible voters. 
According the election schedule, Indonesian expatriates worldwide cast their ballot on Saturday, while the eligible voters will vote domestically on April 17.

The voters have to choose between the incumbent President Joko Widodo (aka Jokowi), who had run for a second term, and his rival Prabowo Subianto. Meanwhile, they have to elect 575 out of 7,968 members nominated by 16 political parties for the parliament seats.

Ambassador’s Helmy fawzy’s spouse Dwi Ria Latifa ran for the parliamentarian election. “Indonesia has a great number of women, who have important roles in all fields and in the Indonesian government. In the Indonesian parliament, women’s quota is 30 percent,” Mrs. Latifa told Egypt Today in previous remarks.