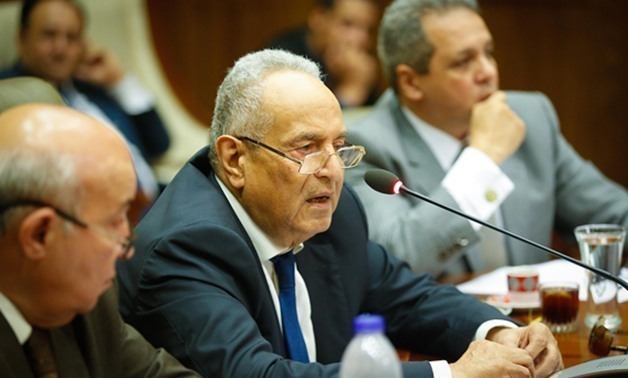 CAIRO – 2 April 2019: Head of Parliament's legislative committee Bahaa Abu Shoka called on local media Monday to urge citizens to vote in the planned referendum on constitutional amendments, and express themselves whatever their opinion is concerning the amendments.

He added that whoever rejects or agrees with the amendments is patriotic.

The legislative committee is charged during this week to discuss the proposals submitted by 155 parliament members on the constitutional amendments, and then to start next week to draft the articles to be amended, in accordance with the requests submitted by MPs.

The Parliament discussed in the past few days the constitutional amendments, which it has already approved initially, during a series of sessions of societal dialogue.

In an interview with 90 Minutes program on Al-Mihwar, Abu Shoka said that the wording of the constitutional amendments will be presented to the plenary session.

The MPs would be asked by names to then approve or reject the amendments, Abu Shoka said, adding that two thirds of the MPs must approve the amendments in order for a referendum to be conducted.

He said that it is possible for any of the world's constitutions to be amended, adding that the state is establishing a democratic state through which law would prevail.

The state's President or fifth the members of the parliament, each has the right to propose amending the constitution, Abu Shoka said, adding that the amendments of the 2014 constitution have been carried out while the state was passing through hard circumstances.

He added that amending the constitution currently aims to restore stability and security, adding that the current time helps to establish a modern and democratic state.

The move targets amending the first and third paragraphs of Article 102 of the constitution, with the aim of guaranteeing at least quarter of parliamentary seats for women.

Also, amending Article 140 aims to increase the term of the president to six years instead of four, which would be applied on the next president, after President Abdel Fatah al-Sisi finishes his second term. However, the incumbent president will have the right to run for a third term.