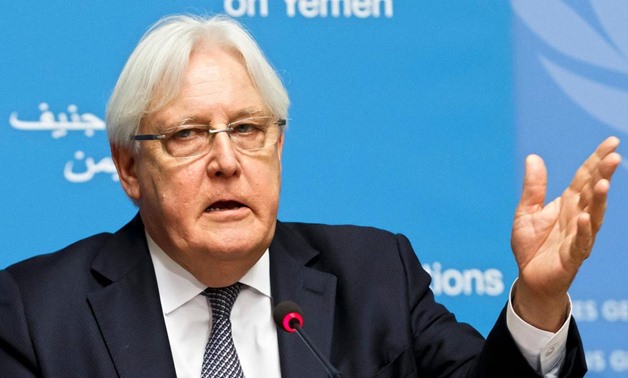 Martin Griffiths, UN Special Envoy for Yemen, gives a press conference on the eve of the Geneva Consultations on Yemen at the European headquarters of the United Nations in Geneva, Switzerland. EPA

CAIRO – 29 March 2019: The UN envoy to Yemen Martin Griffiths said on Thursday the redeployment of rival factions in the key port city of Hodeidah is "slow", but will happen.

Prince Khalid and Pompeo "agreed on the need for parties to adhere to the agreement made in Sweden," the US State Department said. Pompeo expressed his appreciation for Saudi Arabia’s continued support for Griffiths’ efforts "to advance the political process in Yemen."

The deal between the Yemen government and Houthi militants was signed in the Swedish capital in December, and while leading to a reduction in hostilities in the city, it has since stalled.

Griffiths told The Associated Press that the cease-fire in the key port held seized by the militants near the start of the conflict is holding.

"As I've been reminded recently there are 50 percent fewer civilian casualties in Hodeidah since the cease-fire came into account than in the previous three months," Griffiths said.

"So that's quite a change and that's good for the people of Hodeida, but we need to go further. We need to quickly see those redeployments happening,” he added.

The Houthi militia have committed 1,112 violations since the Hodeidah agreement came into force on Dec. 18, 2018, leading to 76 civilian deaths and 492 injuries.