By: Egypt Today staff
CAIRO – 26 March 2019: As the government has restricted areas where TokToks can move, it seeks to find new alternatives to replace the long-banned motor tricycle cars in main streets and districts.

Minister of Local Development Mahmoud Shaarawy stated Monday that the government is seeking to license vans as cabs to replace TokToks in main streets.

The government has licensed a total of 233,000 TokToks across different governorates as part of the country’s move to legalize the tricycle cars and set regulations to its use across Egypt.

“TokToks are an unwelcomed phenomenon, asthey cause most of the road accidents. By legalizing them, we aim at eliminating illiteracy, drug addiction, drugs’ illegal trade and accidents,” Minister Mahmoud Shaarawysaid.

Shaarawy added that the country’s decision to ban the import of tricycle cars will limit theirpresence in streets and meet the government’s goal to preserve traffic liquidity.

TokTok has raisedcontroversy in the country since it appeared in 2005. However, satisfying alternatives have not yet been given.

CAIRO - 19 January 2018: Member of Parliament (MP) Nosela Abu Amr called Saturday on unifying the color of TokToks for each governorate as part of the House's move to legalize the long-banned motor tricycle cars and set regulations to its use across streets.


The new traffic law sets rules regulating toktoks through banning them from moving on highways and main streets and districts, and allowing them to only move in slum areas and narrow streets.

TokTok drivers have experienced rejection from the officials, with several financial penalties imposed on driving unlicensed tricycles in Cairo.

The Parliament urged to realize that driving toktoks "has become a source of income for many citizens," trying to reverse the chaotic theme attached to the tricycles' drivers, who are blamed for traffic congestionin several districts in the capital. 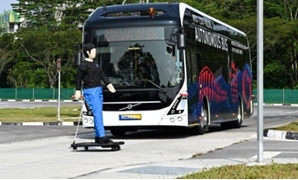