By: Egypt Today staff
CAIRO – 8 MARCH 2019: On the occasion of the International Women's Day, Egypt’s National Council for Women (NCW), headed by Maya Morsy, issued a statement to mark the celebration.

"The NCW offers felicitations for women everywhere in celebration of the International Women’s Day, celebrated on March 8 every year,” read NCW’s statement on Tuesday.

President of the NCW, Morsy, said that March 8 is an opportunity to ponder the progress achieved for the women’s cause all over the world in the light of women’s current role in orchestrating their societies’ history.

Morsy wished that all women gain a better future and their full rights, stressing that societies’ stability cannot be achieved without a real women’s involvement in all the fields.

Morsy further highlighted Egypt’s late accomplishments in the field of Woman empowerment and gender equality, on top of them, the constitution that includes several articles banning sex discrimination and inequality. The constitution allowed the biggest parliamentary representation of women since the establishment of Egypt’s parliament, added Morsy in the statement.

Socially, the gap between the boys and girls in education has been reduced on an unprecedented scale, besides, harsher punishments have been made for Female genital mutilation (FGM) and sexual harassment, continued Morsy in the statement.

The statement included NCW’s strategy for the Empowerment of Egyptian Women 2030 that was ratified by President Abdel Fatah al Sisi in 2017.

Furthermore, the Cairo International Airport has received female Arab and foreign travelers arriving in Cairo with packs of roses and chocolate with a slogan that says “Tâ' MarbûTa ( a character that comes at the end of a word to express femininity) is the secret of your strength” 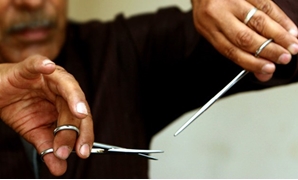