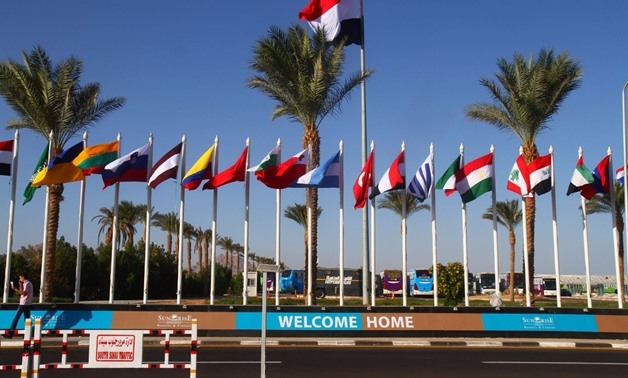 CAIRO – 23 February 2019: Leaders and government heads of 28 European countries and 21 Arab states will be convening a two-day summit in Sharm el-Sheikh, on Sunday, to discuss joint challenges and boost mutual cooperation opportunities.

This is the first ever platform that brings together the Arab and European heads of state and government to tackle the pressing issues, atop of which terrorism, organized crime and illegal immigration.

Chairman of the Egyptian Council for Foreign Affairs (ECFA) Ambassador Munir Zahran told MENA that the upcoming summit represents a great opportunity for enhancing the Arab-European cooperation and dialogue, where they will discuss problems of mutual concern and exchange views on various regional and international issues.

Several political issues will be also raised during the summit, topped by the Palestinian cause, Zahran said, stressing the importance of maintaining the unity and territorial integrity of Syria and putting an end to the Libyan and Yemeni crises.

Egypt’s Sharm el Sheikh International Airport is on high alert in preparation for receiving the high guests and heads of Arab and European countries, who are participating in the upcoming Arab-European summit due on February 24 and 25, said the Egyptian Ministry of Civil Aviation in statement on Thursday.

The summit will be co-chaired by President Abdel Fatah al-Sisi and President of the European Council Donald Tusk.

“Not a single illegal migration case has crossed the Mediterranean Sea from Egyptian shores since September 2016," President Sisi announced, adding that his country held a series of bilateral talks with a number of European countries to deal with illegal migration from Africa to Europe.

“Egypt hosts millions of registered and unregistered migrants who are integrating into the Egyptian society,” Sisi continued.

Egypt’s strategic location made the North African country the link between Africa, the Arab region and Europe through the Mediterranean Sea, according to Sisi.

The Egyptian president said Egypt’s strategic location made it the link between Africa and the Arab region, and between Europe, the Arab and African regions through the Mediterranean.

Ahead of the summit, the Egyptian cabinet’s media center has published several infographs detailing cooperation between European Union and the Arab League; the trade exchange volume between Arab states and EU, in addition to investments by the European Bank for Reconstruction and Development (EBRD) in Egypt and Arab countries.

The volume of trade exchange between Egypt and the European Union states rose to €28 billion in 2017, compared to €17.4 billion in 2007, the cabinet media center said on Saturday.

The infographics indicated that trade exchange between the EU and Arab countries increased 7 percent to €315.9 billion in 2017, compared to €295.5 billion in 2016.

The infographics pointed out to cooperation between the EU and the Arab League (AL) in combating arms smuggling via a project that aims to enhance means of monitoring conventional weapons in the Arab League’s member states at a total cost of €2.7 billion.

The two sides also work together to support efforts of the anti-Daesh international coalition, while ensuring human rights and the rule of law, they added.

More than 750 Arab and foreign correspondents will participate along with local journalists in the Arab-European Summit set to held in Sharm el-Sheikh, Egypt Sunday.

The two-day summit will witness the attendance of country leaders and heads of governments representing 28 European countries and 21 Arab states.

A month ago, the Ministry of Foreign Affairs have started receiving demands from around 550 foreign correspondents to attend the summit, in addition to 250 reporters from different local and foreign media outlets and news agencies. Mohamed Emam, the head of the press center of the State Information Service Authority said that more than 200 journalists will be accompanying the presidential delegations from Arab and European countries participating in the summit.

According to Emam, all media personnel approved to attend to the summit will receive required press allowances upon their arrival. He further assured that facilitations guaranteed to their and their equipment entrances.