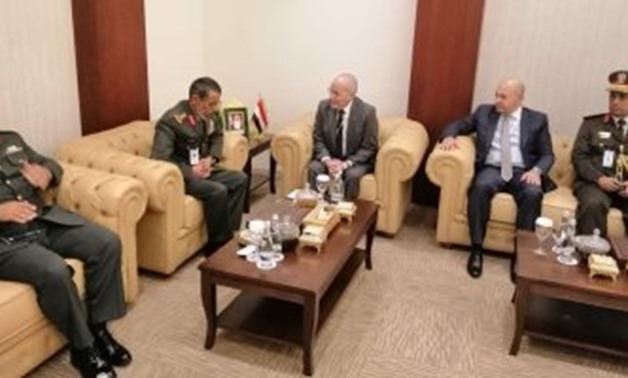 Minister of State for Military Production Mohamed al-Assar in a meeting with Emirati defense officials on the sidelines of IDEX2019 held in Abu Dhabi, UAE on February 17-21. Press Photo

The Emirati officials affirmed the necessity to cooperate in the sector of military production.

They said that the M1-A1 and M88-A2 tanks as well as the other Egyptian-made defense products that were exhibited in EDEX 2018 reflect technological advancement in Egypt’s defense industry.

They also expressed their appreciation for Egypt’s selection of the UAE to exhibit the aforementioned tanks for the first time in a foreign country.

On his side, Assar lauded the technological advancement of the Emirati defense industry, and the outstanding organization of the exhibition. The minister added that Egypt will take part in IDEX2021, and that more Emirati firms will take part in EDEX2020.

Assar met with Senior Managing Director of OshKosh Defense in the Middle East, Africa and South Asia Michael Dishman. The company manufactures tactical vehicles, and has been a partner of the ministry in the production of heavy and medium tactical trucks. Dishman said he looked forward to expanding partnership with Egypt.

The minister also met with the representative of General Precision Machinery Dynamics who expressed interest to partner with Egypt.