U.S. President Donald Trump gestures as he talks to the media on South Lawn of the White House in Washington, U.S., before his departure to Camp David, December 16, 2017. REUTERS/Yuri Gripas

By: Reuters
WASHINGTON – 8 January 2019: President Donald Trump announced on Monday he would make a prime-time address and visit the U.S.-Mexico border this week as the partial federal government shutdown entered its 17th day after a funding impasse over his demand for money to build a border wall.

The moves indicate the Republican president has no intention of backing off his pledge to build a wall that he believes will stem illegal immigration and drug trafficking. Democrats in Congress say a wall would be expensive, inefficient and immoral.

However, pressure to reach a deal is likely to grow as the effects of the shutdown are felt, including possible cuts in food stamp programs and delayed tax refunds.

Trump planned to visit the U.S.-Mexico border on Thursday, White House spokeswoman Sarah Sanders announced on Twitter without providing details. The visit likely will highlight security concerns pushed by the administration as justification for the wall.

A short while after Sanders' tweet, Trump said in his own Twitter post that he will address the nation on Tuesday at 9 p.m. EST (0200 GMT Wednesday) to discuss what he called a humanitarian and national security crisis on the southern U.S. border.

Large chunks of the federal government shut down on Dec. 22 over Trump's demand that a bill to keep the federal government operational include more than $5 billion to pay for a wall along the border with Mexico. About 800,000 government workers have been either furloughed or working without pay since Dec. 22. Trump said on Friday he could declare a national emergency in order to build the wall, which would circumvent Congress' authority over funding for the federal government.

The White House did not say whether he planned to make such a declaration, which would almost certainly face a legal challenge, on Tuesday night.

Trump directed the White House budget office to take steps to mitigate the effects of the shutdown, including ensuring tax refunds are delivered, Pence told reporters.

Pence said Trump also invited Democrats back to the White House to respond to its latest proposal to resolve the standoff over legislation to fund the government.

Pence, who participated in weekend discussions on the shutdown, said Democratic staff said there would be no negotiations until the government is reopened.

Trump said in December he would be "proud" to shut the government down over the wall and last week told lawmakers it could last months.

Trump skipped a planned trip to Florida to stay in Washington during the Christmas and New Year's holidays after large chunks of the federal government were shuttered on Dec. 22. He exhorted Democrats in Congress to "come back from vacation" and approve funding for his wall.

Democrats returned to Washington in the new year, taking control of the U.S. House of Representatives, and passed legislation to reopen all closed government agencies but did not include wall funding. This week, they will pass a series of bills to reopen federal agencies after weekend talks between the Trump administration and Democratic negotiators failed to end a stalemate.

On Sunday, Trump pledged not to bend in his demand money for the wall but said the barrier could be made of steel instead of concrete as a potential compromise with Democrats who refuse to fund it.

Trump has argued the wall is necessary for national security and has tried to link terrorism to illegal immigration, without providing evidence, as justification for the plan. Democrats say there has been no evidence of suspected terrorists coming through the southern border and that Trump has no grounds to declare a national emergency over the issue.

Democrats say other border security measures are more efficient and cost-effective than a wall, which they say is contrary to American values.

Trump has previously given three prime-time televised addresses and two during the day, according to data compiled by CBS News. 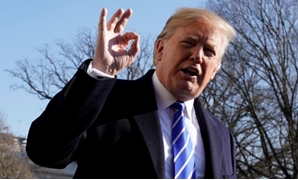