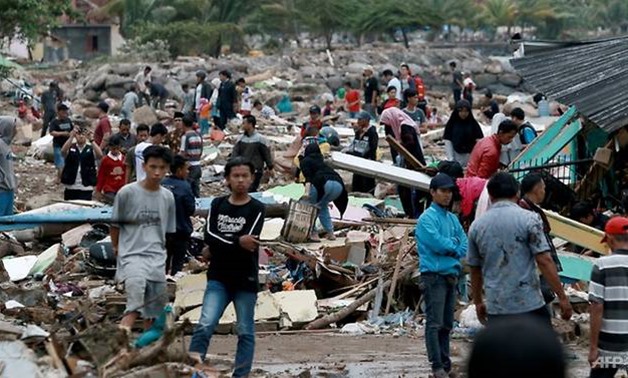 Rescuers and residents look for survivors along the coast in South Lampung on South Sumatra on Dec 23, 2018. (Photo: AFP/Ferdi Awed)

CAIRO - 24 December 2018: The Singapore Red Cross on Monday said it would extend $50,000 in humanitarian aid to support those affected by the tsunami in Indonesia.

At least 280 people were killed and hundreds more injured by the wave which was set off by an eruption of the Anak Krakatoa volcano.

Indonesian authorities have warned people who have evacuated the Sunda Strait beaches region not to return until they are told it is safe.

Around six hours before the tsunami hit, Rahmat Triyono, the head of the meteorological agency, was quoted by Reuters as saying, “Please do not be around the beaches around the Sunda Strait. Those who have evacuated, please do not return yet.”

Hundreds of homes and other buildings were “heavily damaged” in the tsunami which struck along the rim of the Sunda Strait late on Saturday.

It was the latest in a series of tragedies that have struck Indonesia, a vast archipelago, this year. Successive earthquakes flattened parts of the tourist island of Lombok, and a double quake-and-tsunami killed thousands on Sulawesi island. Nearly 200 people died when a Lion Air passenger plane crashed into the Java Sea in October.