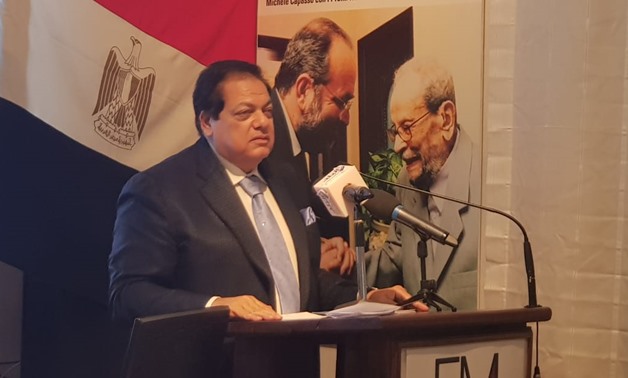 CAIRO – 13 November 2018: Egyptian prominent businessman Mohamed Abul-Enein received on Monday Nobel Prize for economics and International diplomacy for year 2018 from Union for the Mediterranean (UFM), in a ceremony attended by representatives of 42 countries.

Several diplomatic and business figures were keen to attend the ceremony such as the Egyptian ambassador in Italy, Hisham Badr, UFM Secretary General, Abdul Haq Azzouzi, and the President of UFM Michel Cabasou, the attendees included as well vice chairman of Cleopatra Group Tarek Abou El-Enein.

“Raising Egypt’s name in the International arenas is one of my dearest wishes, and today I have realized such a wish by receiving this prestigious prize. I am proud not only because of the award, but because both countries- Italy and Egypt- have a civilization dates back to 7000 years ago, and they cooperate to advance such civilization”, said Abul-Enein during his speech.

The Egyptian businessman was keen to recite his investment tale which started 30 years ago, when he decided to invade the wasted desert in Egypt amid a wide shock from all the businessmen then due to the lack of technology and infrastructure.

“Egyptian President Abdel Fatah al Sisi succeeded to put an end for terrorism in Sinai Peninsula with the aid of the Egyptian military forces, sending a strong message to whoever seeks to harm Egypt’s interests”, added Abul-Enein.

"I was chairman of the Economic and Financial Affairs Committee of the Euro-Mediterranean Parliamentary Assembly for eight years after I was chairman of the Mediterranean Parliamentary Committee for two years. I am happy with the many achievements I have made, I would like to extend my thanks to everyone who attended our celebration today, which is a great honor and a source of great happiness. " added Abul-Enein.


Abul-Enein further said that Egypt suffered from terrorism for two years before defeating it, adding that there was a comprehensive strategy to topple several states in the region, however, it was foiled due to united efforts.

The President of UFM Michel Cabasou said during his speech in the ceremony that Egypt has won the prestigious award twice, the first one was won by the late prominent novelist Naguib Mahfouz in 2003 .

The UFM is one of the most famous and prestigious international institutions that are interested in promoting cooperation in various fields among the Mediterranean countries. The annual awards are given to the contributors in the field of international diplomacy, culture, art, science and others for their role in reducing tension and breaking cultural barriers and the development of common values in the Mediterranean region.