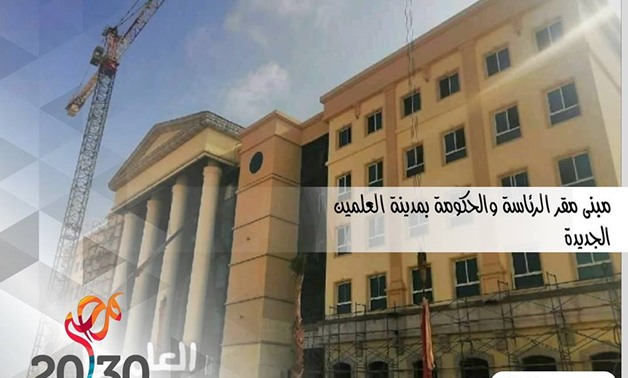 CAIRO – 10 November 2018: The Ministry of Planning published Saturday on its official page several photos showing progress in the construction process of the presidential and cabinet HQs buildings in the new El Alamein city.

The new Al Alamein city is one of four new cities under construction by the government. The three others include the New Administrative Capital, East Port Said and the new Al-Mansoura city. The government is also building a solar water desalination plant in Alamein city.

According to the ministry, about 11 thousand people are already living in the city which targets to host population of 400,000 after the completion of the first phase of the city.

Developed by the New Administrative Capital for Urban Development after the launch of the idea in 2015, the new capital, which is spread over 1,133 feddans, is the government’s solution to accommodating Egypt’s ever-growing population and expanding urban areas.

Speaking at last September’s Euromoney Conference, Ismail noted that, “Cairo is facing a challenge with government institutions and offices being centered in downtown, and the plan here is to relocate these offices to the project in the ‘government district’ while also serving an economic purpose of acquiring revenues worth $10 billion by 2030, and being in proximity to Cairo and the SCZone.”

The new capital is set to see the headquarters of all banks in Egypt, as well as the buildings of the ministries, parliament and administrative affairs.

The government district will be finalized this year and state institutions will relocate in 2019, according to Ismail. The headquarters of the Egyptian presidency will also be moved to the new capital by June 2019, according to the Chairperson of the New Administrative Capital for Urban Development Ahmad Zaki Abdeen.

Comprising a total of 20 residential neighbourhoods worth $15 billion, the project’s first phase is estimated at $8 billion and spans over 12,500 feddans, featuring 25, 000 residential units (eight of the 20 residential unit) and infrastructure projects, according to Minister of Housing and Urban Communities Moustafa Madbouly.
The residential areas in the project will include an array of accommodation units, including apartments, villas, town houses, offices spaces and commercial areas.