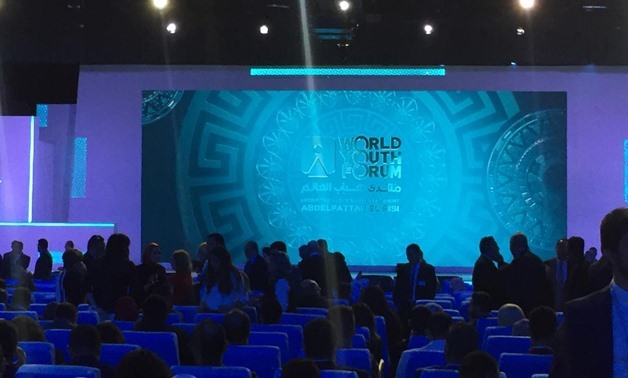 CAIRO – 4 November 2018: The first session of the second day of the World Youth Forum (WYF) kicked off Sunday morning at Sharm El Sheikh under the title, “The Role of World Leaders in Building and Sustaining Peace.”

During this session, participants discussed the role of world leaders in building and sustaining peace.

Sisi officially launched the second edition of the World Youth Forum (WYF) on Saturday at the end of the opening session.

The opening session was attended by hundreds of participants, as well as keynote speakers, top officials and prominent individuals from all over the world.

Below, Egypt Today starts a live update to the first day of 2nd edition of the World Youth Forum

President Sisi arrived at the main venue to attend the first session of WYF.

Bin Hamad asserted that Egypt has, throughout history, gone through numerous wars and was victorious in them at the end ever since the Pharaonic period.

"we are not entitled to teach the Egyptians the meaning of peace and coexistence," he said.

Tunisian Minister of Youth and Sports, Majdouline Chernin said that building peace does not take place except through establishing its culture which is based on dialogue and partnership between the democratic institutions and the civil society.

The forms of dialogue have developed, the minister said during the session, referring to social networking and the modern technology.

She called for the need to have care provided to youth by the government through listening to their problems and including them in decision-making.

Rwandan Minister of Youth and Sports Rose Marie said women represent about half of the world population and therefore world leaders should let them join in decision making, facing challenges and settling economic crises worldwide.

Women are capable of taking right decisions in the society, she said, adding that more than 40% of women work in the field of justice in Rwanda.

The society should include women and youth, she stressed, adding that her country is keen on delivering peace to the coming generations.

President Abdel Fatah al-Sisi delivered a speech at the end of the first session of the World Youth Forum's on Sunday which came under the title, “The Role of World Leaders in Building and Sustaining Peace.”

Sisi asserted his protection to the freedom of worship, saying that the state is concerned to build a church in each new community, adding that “if there are other religions in Egypt, we will build worship places for them.”

“It’s the right of any citizen to worship God as he pleases, or even worship nothing because the state doesn’t intervene in these issues,” Sisi pointed. “We in Egypt do not differentiate between Muslims and Christians. All citizens are Egyptians.”

Sisi stressed that equality among all social segments is one of the main cornerstones of social peace.

Furthermore, Sisi confirmed that the political visions of leaders are key factors in achieving peace inside and between countries.

“The ability of the leaders to read the situation, whether regarding relations with other countries or within the state itself, differs from one leader to another according to the cultural, intellectual and scientific backgrounds as well as many other factors,” he explained.

Sisi underscored that leaderships in various countries should deal with citizens regardless of their gender and religion.

He shed light on the vision of late President Anwar Sadat, who achieved peace that was based on his correct reading of the situation.

Moreover, Sisi addressed illegal immigration and unemployment, asking if those developed countries who suffer from illegal migrants are ready to offer job opportunities to youth in countries with high unemployment rates.

"Are these advanced nations that have only 3-4-percent unemployment rate ready to help countries like Egypt and other African nations to set up projects that would really lower growing unemployment," he continued.