Turkey, US press Riyadh to explain fate of missing journalist 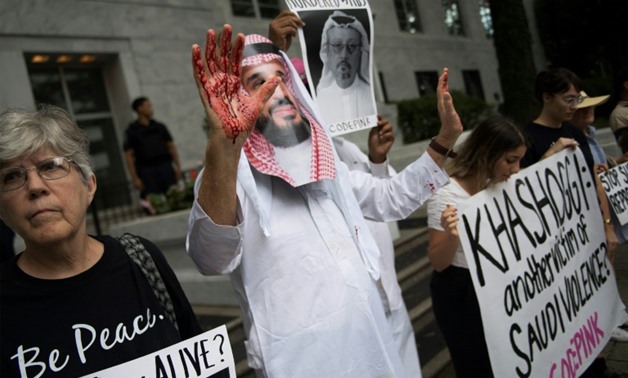 PARIS - 12 October 2018: Turkey and the United States on Thursday ratcheted up the pressure on Saudi Arabia to explain how a journalist vanished after entering its Istanbul consulate last week, with President Recep Tayyip Erdogan urging the release of CCTV footage from the mission.

The Washington Post, which Khashoggi wrote for, added to the still unresolved mystery by reporting Saudi Crown Prince Mohammed bin Salman had ordered an operation to "lure" the critical journalist back home.

Khashoggi, a Saudi national whose articles have criticised the prince, has not been seen since October 2 when he went to the consulate in Istanbul to obtain official documents for his upcoming marriage.

Turkish officials have said he was killed -- reportedly by a 15-man "assassination team" that arrived on two planes -- but Riyadh denies that.

The disappearance has captured international headlines and threatens to harm Saudi's relations with both Ankara and Washington, as well as damage efforts by Prince Mohammed to improve the country's image.

Erdogan challenged Saudi Arabia to provide CCTV images to back up its account that Khashoggi had left the consulate safely, indicating he did not find the current Saudi explanations sufficient.

"Is it possible there were no camera systems in a consulate, in an embassy?" he asked.

"If a bird flew, or a fly or a mosquito appeared, the systems would capture this; they (Saudi Arabia) have the most cutting-edge systems," he was quoted as saying.

The consulate said CCTV cameras were not working that day and dismissed the murder claims as "baseless".

The case is also threatening the strong relationship the Trump administration has built with Prince Mohammed, who wants to turn the oil-rich conservative kingdom into a hub for innovation and reform.

The two sides have worked together in confronting Iran despite growing concern over the prince's campaign against dissidents, which critics say has revealed the true face of his rule.

In a reversal from Washington's initial low-key response, President Donald Trump expressed determination to get to the bottom of the matter.

However, a Turkish diplomatic source quoted by the state-run Anadolu news agency denied US investigators had been tasked to work on the case.

And Trump later said the United States was not limiting arms sales to Saudi Arabia over the case. "They're going to take that money and spend it in Russia or China or someplace else," he said.

Jeremy Hunt, the foreign secretary of key Saudi ally and trade partner, Britain, told AFP there would be "serious consequences" if the allegations were true.

Saudi Arabia also dropped a bid to join the world's club of French-speaking countries, The International Organisation of the Francophonie (OIF).

Khashoggi is a former government adviser who fled Saudi Arabia in September 2017 and lived in the US fearing arrest back home.

In his columns for the Washington Post and comments elsewhere, he was critical of some policies of Mohammed bin Salman as well as Riyadh's role in the war in Yemen.

While unnamed Turkish officials quoted in the media have been giving sometimes macabre details of the alleged murder, Erdogan has so far been more circumspect.

Erdogan said it would "not be right" to comment yet but said he had "concerns".

"It's not possible for us to stay silent regarding an incident like this," he said.

Turkish authorities have been given permission to search the consulate -- Saudi sovereign territory -- but this has not yet taken place.

Foreign Minister Mevlut Cavusoglu said Turkish prosecutors had began an "intense and comprehensive investigation" which needed the cooperation of Saudi Arabia while presidential spokesman Ibrahim Kalin said a joint working group would be set up.

Ankara and Riyadh have worked over recent years to maintain cordial relations despite disputes on key issues, such as the ousting of the Islamist Egyptian government and the blockade on Turkey's key regional ally Qatar.

Relations between Turkey and the United States, meanwhile, have been in crisis over the two-year detention of US pastor Andrew Brunson. But should he be released at his next hearing Friday it would help restore confidence between the NATO allies.

Friends of Khashoggi told the Washington Post that for several months, senior Saudi officials were offering him protection, "even a high-level job working for the government" if the critic returned to the kingdom. Khashoggi was sceptical of such offers.