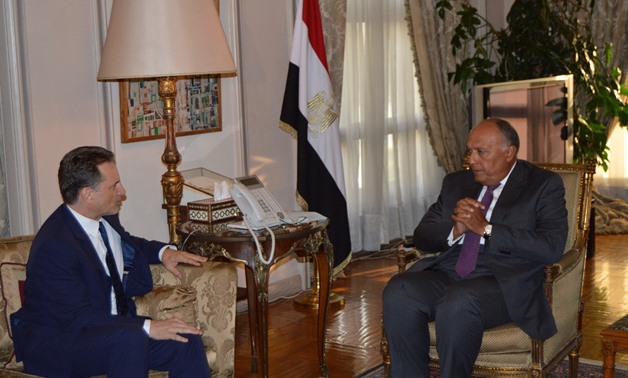 CAIRO – 11 September 2018: Egyptian Foreign Minister SamehShoukry received Monday Pierre Krähenbühl, the commissioner general for the United Nations Relief and Works Agency for Palestine Refugees in the Near East (UNRWA), to discuss ways to ease the suffering of Palestinian refugees.

Shoukry also highlighted the responsibility placed on the shoulder of the international community to apply the UN decisions related to the UNRWA, aimingto easethe suffering of the Palestinian people.

Egyptian Foreign Minister SamehShoukryreceivesPierre Krähenbühl, the commissioner general for the UNRWA, September 10, 2018 – Press photo
Listening to Krähenbühl’s review of the financial challenges the UNRWA is facing in the wake of the US decision to stop funding the UN refugee body,Shoukry welcomed the UN official’s commitment to allow UNRWA’s schools to receive hundreds of thousands of students for this academicyear despite financial hardship.

For his part, Krähenbühl praised Egypt’s support to the UNRWA while chairing the agency’s Advisory Commission over the past year. He also thanked Egypt for carrying out intensive communication with international donors to provide the agency with necessary fund.

WASHINGTON/RAMALLAH - 1 September 2018: The United States on Friday halted all funding to a U.N. agency that helps Palestinian refugees in a decision further heightening tensions between the Palestinian leadership and the Trump administration.


Krähenbühl will attend the 150th ordinary session of the Arab League (AL) council chaired by Sudan on Tuesday at the level of foreign ministers. During the meeting, the UN official will deliver a speech about the agency’s financial status.

The session will be of great importance given the region’s recent developments, the current attempts to end the role of the (UNRWA) and the ongoing preparations for the upcoming session of the UN General Assembly, to be held later in September, spokesmanof the AL Secretary General Mahmoud Afifi said.

In statements, Abu Ali stressed that the United States is not entitled to cancel UNRWA, which he said was established by UN General Assembly Resolution no. 302 of 1949.

The resolution stipulated that UNRWA should provide services in all fields to Palestinian refugees until their issue is resolved in all its aspects, he noted.

The official asserted that the US decision violates international law and the UN resolution that created UNRWA.

US has long been the biggest donor to the UNRWA, donating about $360 million to the agency in 2017. It is funded by the voluntary contributions from UN Member States and from the Regular Budget of the United Nations.

“The agency’s services encompass education, health care, relief and social services, camp infrastructure and improvement, microfinance and emergency assistance, including in times of armed conflict,” according to UNRWA.

Spain rejected the serious decision madeby the United States to end all funding to the UNRWA.

Spain rejectedthe accusations made by the US against the UNRWA when it described it as "a corrupt and inefficient agency," according to the statement issued by the Spanish Ministry of Foreign Affairs and Cooperation on September 4.

The statement referred that these accusations contradict with the reality as the UNRWA has been operating under extremely difficult conditions and has carried outits duty to provide emergency support and social assistance to Palestinian refugees for almost 70 years.

Spain confirmedthat the UNRWA's critical financial situation that resulted from Trump’s decision will pose a threat to the continuity of its vital program in the health, educational and nutritional fields, which benefits Palestinians in the Middle East.

In addition to the negative impacts of this decision on humanitarian assistance and protection, depriving3 million Palestinian refugees from basic services willnegatively affect the stability in the Middle East and Gaza Strip.

In January, the United States has put on hold two planned payments of more than $100 million to UNRWA and has informed the body that it will be contributing just $60 million to this year's budget.

Krahenbuhl said in January that the cuts were clearly linked to the Palestinian leadership's decision to freeze ties with the administration of Trump after his controversial recognition of Jerusalem as Israel's capital, adding that Washington could no longer be the main mediator in talks with Israel.

The Palestinians see East Jerusalem as the capital of their future state.

"It has always been and it will always be for every humanitarian agency ... an imperative to preserve and ensure that humanitarian funding is preserved from politicization," Krahenbuhl said.

"It is very important that humanitarian funding not be caught up in political considerations," he said.

AFP, MENA contributed to the articleز