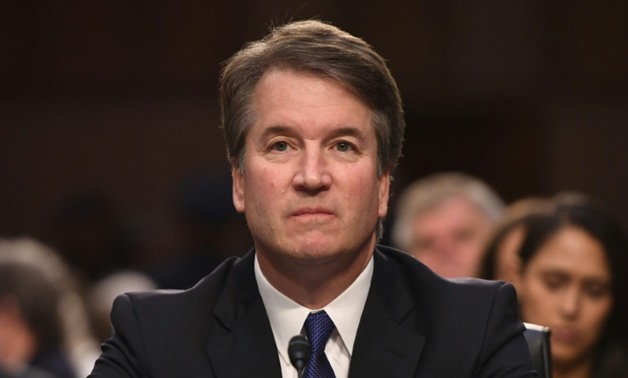 US - 5 September 2018: The confirmation hearing for US President Donald Trump's Supreme Court nominee exploded into political feuding Tuesday, with furious Democrats demanding a postponement over withheld documents, and protesters shouting their opposition.

"I move to adjourn," said Senator Richard Blumenthal, one of several Democrats who interrupted the contentious gathering to insist lawmakers needed time to review thousands of documents related to nominee Judge Brett Kavanaugh that were released Monday night by the administration.

Republicans, facing a possible drubbing in November's midterm elections, had hoped to use the four-day hearing to highlight Trump's and the party's success in getting conservative judges on to courts across the country, and as an opportunity to promote Kavanaugh's distinguished career as a US Court of Appeals judge in Washington.

Instead, within seconds of Senate Judiciary Committee chairman Chuck Grassley banging the gavel, Democrats launched coordinated protests against moving ahead.

"This process will be tainted and stained forever" should it proceed as scheduled, Blumenthal said.

"The motion is denied," Grassley responded, as he vowed to carry on through the weekend if necessary.

The confirmation process takes center stage with just two months before midterm elections that will decide whether Republicans maintain their control of both chambers of Congress.

Fully 60 percent of likely voters in a new ABC News/Washington Post poll said they would prefer the next Congress to be controlled by Democrats, who could act as a check against the president.

Kavanaugh sat stone-faced as lawmakers bickered and protesters repeatedly erupted from the back of the hearing room, leading police to eject them from the proceedings.

Just 53, Kavanaugh would replace retired swing-vote justice Anthony Kennedy in a lifetime appointment, a move that could solidify a hard-right majority on the nine-member court and help shape key aspects of American society for a generation or more.

Republicans hold a one-vote majority in the Senate. Should a single Republican defect to oppose Kavanaugh it could throw his confirmation into jeopardy, although there has been little sign that any GOP senator was prepared to buck Trump.

Questioning of Kavanaugh begins Wednesday, when Democrats are expected to strongly press him on his endorsement of presidential immunity, and notably on his position on abortion and the landmark 1973 Roe v Wade ruling.

Trump campaigned on a promise to nominate pro-life judges and justices, and Democrats warn that Kavanaugh may seek to overturn Roe.

"More women are going to be sent to back-ally abortions!" one protestor screamed.

The scenes were remarkable, even for those with decades of Capitol Hill experience, as lawmakers exchanged heated broadsides.

"This is something I've never gone through before," acknowledged Grassley.

In defense of Kavanaugh, Grassley argued that the panel had already received more than 400,000 pages of Kavanaugh-related documents.

But Democrats repeatedly demanded an adjournment in order to be allowed time to study the 42,000 pages released by the White House just 15 hours before the start of the hearing.

They also pushed for the release of 100,000 more pages they say are being withheld by the administration, particularly those related to Kavanaugh's time in George W. Bush's legal office and as White House staff secretary.

"What is the rush? What are we hiding by not letting these documents come out?" asked Senator Cory Booker.

Six hours into the hearing, Kavanaugh had yet to speak. But in excerpts from his opening statement, he said he is a "pro-law judge" who would bring his impartiality to the nation's high court.

"A good judge must be an umpire -- a neutral and impartial arbiter who favors no litigant or policy," Kavanaugh said in the excerpts released by the White House.

"I don't decide cases based on personal or policy preferences."

Democrats seized on Kavanaugh's record, including comments in which he supported an expansion of a US president's immunity from prosecution -- a dramatic shift from his call for strong action against then-president Bill Clinton when Kavanaugh assisted in an investigation against him.

Veteran Democrat Dick Durbin told Kavanaugh he believed the nominee "totally reversed" after working in the White House when Bush was considering warrantless wiretapping and torture of enemy combatants, and warned that a similar position would only insulate Trump.

"Is this president, or any president, above the law?" Durbin asked Kavanaugh.

Amid the back and forth by feuding lawmakers, Senate Democrat Patrick Leahy said Republican assertions of a transparent process were "downright Orwellian."

Matching the tenor of Leahy's comments, several women dressed as characters from the feminist dystopian novel "The Handmaid's Tale" stood in protest in the Senate building.