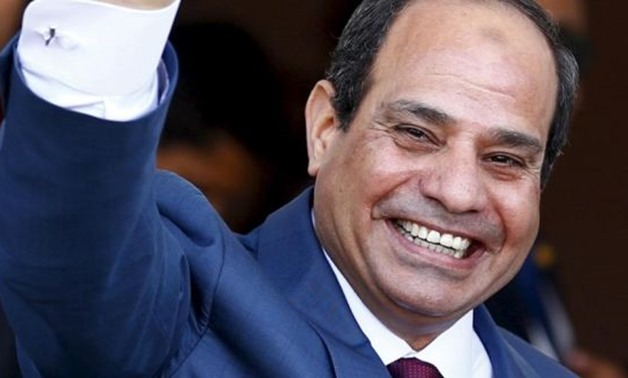 CAIRO – 20 August 2018: President Abdel Fatah al-Sisi greeted “all” people Monday on the occasion of the Islamic Eid El-Adha (The feast of sacrifice), celebrating with them his fifth Adha as President.

In a tweet, Sisi said: “We thank Allah (God) for these blessed days, and we call upon him to [grant] us security, welfare and blessing.”

Eid El-Adha is the most significant feast for Muslims worldwide. El-Adha marks the end of Hajj (pilgrimage) to the holy city of Mecca.

Showing solidarity with many prisoners’ families on the occasion of Eid El-Adha, Sisi issued on Monday a decree to pardon several prisoners. The decision was published in the Gazette.

The presidential pardons are customary to national and religious occasions. According to article 155 of the constitution, the president is allowed to issue pardons only after a final ruling is issued.

However, the perpetrators of certain crimes are not eligible for pardon. These crimes comprise arms trafficking, terrorism, drug trafficking of more than 10 kilograms, heroin trade regardless of the quantity, and revenge killing.

President Sisi usually spends Muslim and Christian feasts among his people. Last June, Sisi attended celebrations of Eid El-Fitr with the families of the nation's martyrs.

On the same day, Sisi said that he ordered the Interior Ministry to release all imprisoned debtors after paying all their debts through Tahya Misr fund, asserting the importance of spending Eid with their families.

“We will always strive to uphold the human dignity and implement the necessary measures to preserve social protection and reduce such phenomena that negatively affect social stability,” Sisi said on his official Facebook account.

Eid El-Fitr is a religious feast celebrated by Muslims worldwide, marking the end of the holy month of Ramadan.

President Sisi attended the Coptic Christmas Mass at the Cathedral of the New Administrative Capital in January.

President Abdel Fatah al-Sisi (R) and Pope Tawadros of Alexandria and Patriarch of Saint Mark Diocese (L) at the Coptic Christmas Mass at the Cathedral of the New Administrative Capital on January 6, 2018/By Karim Abdel Aziz
He wished the Copts a merry Christmas and congratulated them on the inauguration of the Cathedral in the under-construction capital, 45 kilometers east of Cairo.

“Evil, havoc, ruins and murder will never defeat good. Nobody can divide us,” he continued.

President Sisi attended the Coptic Christmas Mass in the past two years.

According to the U.S. Central Intelligence Agency (CIA), Sunni Muslims represent about 90 percent of the population, while Christians represent the remaining 10 percent.

President Sisi showed solidarity with both Christians and Muslims who inhibit the same homeland, and share the same challenges including facing terrorism and current economic hardship.