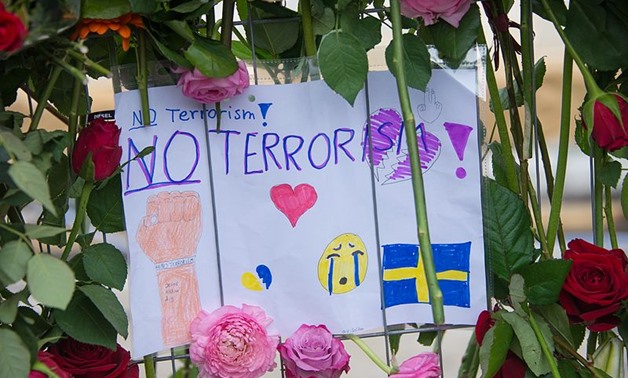 The day after the terrorist attack in Stockholm in April 2017.- CC via Wikimedia

CAIRO – 9 August 2018: The terrorist organizations in Syria and Iraq and their decreasing sources of financial funding and human resources will cause them to resort to what has become known as family terrorism, according to a new study by the observatory of Thought Fatwas and Extremist Thoughts in affiliation with the Egyptian Fatwa center.

What this means is that to recruit more individuals, terrorist organizations will try to spread within family frameworks. One way this is done is through marriages, such as those that took place during the formation of ISIS in Iraq and Syria.

The Observatory explained that a number of international reports confirmed that more than a quarter of foreign fighters in Syria and Iraq have ties of kinship and friendship at varying degrees. When it comes to recruitment, terrorist organizations can use these ties to their benefit.

The study warned that confronting the phenomenon of family terrorism is difficult because of its secrecy and ability to plan and coordinate seriously dangerous operations.

Terrorist organizations developed their mechanisms to infiltrate social structure. It is true that terrorist groups may have family and relatives; however, what is new is that these family members participate in these terrorist attacks.

A rather horrendous example of family terrorism can be seen in the terrorist attacks in Indonesia in May 2018 when a family with a father, mother and son, targeted three churches in Surabaya, killing 12 people and injuring 40 others. A day after the attack, another family of five carried out a suicide attack on a police station, injuring dozens of people.

These incidents are not limited to certain countries. The United States also happened to witness a family terrorism attack at the bombing of the Boston Marathon back in 2013 carried out by brothers. The incident killed three and injured 264 people. Arab countries are not an exception to these phenomena. In July 2015, Saudi authorities announced the arrest of three brothers that were believed to be linked to the suicide attack on a Shia mosque in Kuwait.
Some of the questions on family terrorism deal with what caused the phenomena to spread, how it spreads and why they have resorted to this type of recruitment.
The studies noted that family terrorism could be linked to issues of racism, discrimination, and non-integration, or rather marginalization, within societies that pushes these individuals into joining terrorist, extremist groups. To them, it could mean some sort of protection and a fulfillment in their ambitions to be part of something.

By recruiting entire extremist families, terrorist organizations can circumvent the strict restrictions imposed by the security services of different countries, since the association of terrorists with relatives facilitates coordination between them.

Alongside this, terrorists that join and persuade their own relatives use a so-called emotional bonding effect or socialization to increase their numbers. This can explain why terrorist organizations are keen on recruiting large numbers of women, as they play prominent roles in bringing up children.

Hence, many attacks now involve children being forced to commit terrorism themselves. Whether they are being forced by their radicalized parents or ring leaders in terrorist organizations, these children are victims. Without guidance or understanding of anything beyond the sphere of what they have seen and learned, the process of de-radicalization is difficult.

According to an article in ABC, Australian Broadcasting Corporation, there is a secret school in Indonesia for the children of terrorism that aims to de-radicalize them, showing them the beauty of life, listening to music, playing games and making friends in hopes that they can re-integrate back into society.