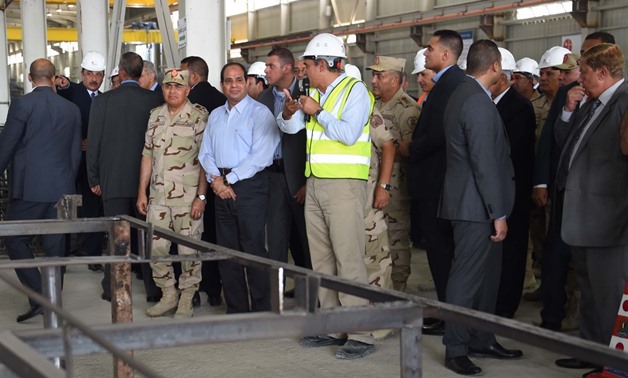 The Suez Canal tunnels project aims to ease congestion in the area due to industrial development and population growth.

Chairman of the Armed Forces’ Engineering Authority Kamel el-Wazir said that the four tunnels underneath the Suez Canal will operate as following: The first tunnel in southern Port Said will connect Salloum on the western border with Rafah in the east through the international coastal road in the canal region.


The second set of tunnels in northern Ismailia will connect the international western border with northern Cairo through the Regional Ring Road.


The third set in Sarabium should serve the northern part of the Regional Ring Road, which will be connected to Taba through the Sarabium tunnel, Wazir said.


The fourth set of tunnels will extend from Ahmed Hamdy tunnel to connect the western international border with the southern part of the international regional road.


The length of each tunnel is about 2,850 meters with a maximum of 3,850 meters. The distance between the northern and southern tunnels is 13 meters. The tunnels also have emergency passages for individuals. Each tunnel has a height of 5.5 meters and serves one traffic direction with two traffic lanes. The establishment of the tunnels came at a cost of LE 18 billion ($1 billion), according to Akhbar el-Youm.

Sisi to signal launch of Suez Canal tunnels within days

CAIRO - 16 December 2017: The pilot operation of the four Suez Canal tunnels in Ismailia and Port Said started and will launch in a matter of days, after President Abdel Fatah al-Sisi gives the signal to start, according to Akhbar el-Yom newspaper Saturday.

Wazir pointed out that the Armed Forces Engineering Authority contracted four national companies to implement the tunnels project, adding that four giant drilling machines were assembled by a German company.


He added that owning these drilling machines will help in rationalizing the implementation cost of the project and to have the ability to implement other projects at any time, whether inside or outside Egypt.


This came during the visit of President Abdel Fatah al-Sisi and Saudi Crown Prince Mohamed bin Salman to Ismailia to check national projects at the Suez Canal earlier in March.

CAIRO - 5 March 2018: Chairman of Armed Forces Engineering Authority Kamel al-Wazir said that Suez Canal tunnels shortened the transit time of the Canal to 20 minutes instead of waiting on the Canal's ferries and el-Salam Bridge that could extend to 5 days.


"What we are doing is a very strong, linking between the East and West of the canal, and between Sinai and Delta. We are talking about developing and reconstructing 60,000 kilometers, this is a huge project that cannot be completed in 10 or 15 years," Sisi announced.

Sisi defies time, new system to link Sinai to all of Egypt