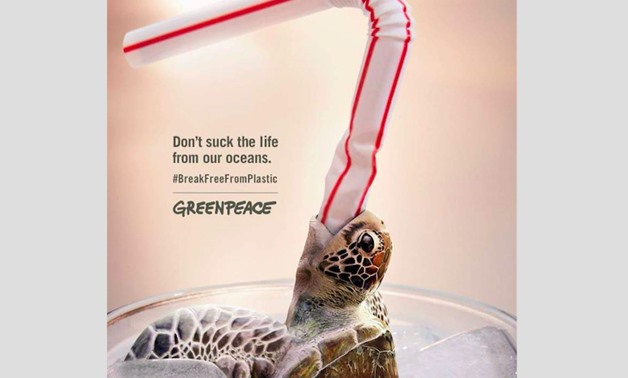 CAIRO – 2 August 2018: Just a few days ago, a holidaymaker in Egypt’s North Coast made a video concerning a turtle he found dying on the beach.

The holidaymaker was enjoying his holiday by the beach when he found a turtle that was almost dead, according to his video. The turtle died a short time after he found it.

In a video made by the holidaymaker, he enthusiastically urges those who are enjoying their time on the beach to be aware of their surroundings and make sure to collect their waste and rubbish before they leave. “It may not affect you, but it will affect other creatures around you,” explains the holidaymaker in his video.

You may not see it, but it is true, he affirms.

On this sad note, we are reminded once again of the importance of marine life and the role we need to play to protect it.

With an ever increasing marine death toll due to plastic waste, oil spills and toxic waste being through in seas and oceans, it is essential for us to start taking steps to maintain our marine life. After all, global oceans are valued at $24 trillion, according to the London School of Economics (LSE). “The ocean makes up over 70% of the planet surface and is critical to the global climate, biodiversity and human health and well-being,” states the LSE.

How did we get here?

Stress due to extreme exploitation, over-fishing, manufacturing without proper care, which has led to climate change, improper disposing of waster and so on, has left the ocean more acidic and warming than normal. This has had a negative effect on the existence and well-being of some species; some have even gone extinct. Yet, we do not seem to understand the severity and the gravity in the situation that we now find ourselves in.

A complex ecosystem means that everything is connected. The extinction of a species will, therefore, affect other species, meaning they will both evolve and stay, or they will die out too. With this, a domino effect is created: Evolution or wipe out. Every time, there is this ultimatum, and once a species dies out, there is no bringing it back.

The saying “It is now or never” has never rung truer.

To fix this issue, we need everyone on board, according to the Blue Finance Movement. A holistic, multi-level, multi-disciplinary view is needed to correctly address and fix this issue properly. Only through a holistic view can we really mitigate the negative consequences that have already started to happen as a result of our excessive neglect.

The good news? There is international consensus, almost.

“The Paris Agreement’s Preamble notes the importance of ensuring the integrity of all ecosystems, including the ocean, and the proposed funding mechanisms for mitigation and adaptation are applicable to ocean and coastal solutions. Similarly, the UN Sustainable Development Goals (SDG14) expressly aim to “conserve oceans and seas”. The UN General Assembly is discussing a marine biodiversity agreement under the UN Convention on the Law of the Sea (UNCLOS) which will be crucial to address the governance gaps,” reads the LSE’s website. However, it must be kept in mind that the US has recently left the Paris Agreement.

Still, there seems to be international agreement that now is the time to take action and that the ocean is vital for global climate, especially given the risk of certain areas becoming submerged under water if we do not take action now.

“Sea levels are rising. You can build costly dams to protect coastal areas or you can invest in mangroves and sea grasses that not only act as a buffer to coastlines but are also carbon sinks,” says Torsten Thiele, founder of the Global Ocean Trust. “But to move the needle on climate change, we need to work collectively. It is important to work with small countries to make their efforts count.”

So, how does Blue Finance fit in?

Blue Finance is an initiative that aims to lobby and strengthen the case for creating and implementing solutions to keep the oceans clean. It aims to make the ocean habitat sustainable after the challenged that it has faced due to human greed and lack of care.

Their goal is to deliver evidence-based solutions that involve stakeholders at all levels, particularly the private sector and emerging economies. The former’s importance lies in the fact that they are the biggest reason behind ocean pollution, while the latter’s importance lies in the fact that emerging markets typically have lower environmental standards and therefore more pollution, as well as the fact that they typically move to industrialization, which produces much carbon dioxide and other harmful toxins that pollute air and water.

Why focus on finance?

Commenting on their key objectives, Nicolas Pascal, founder and director of Blue Finance, says, “Quite simply, MPAs are one of the best tools we have right now for improving the health of the marine ecosystems. We can’t depend only on governments and grants to pay for marine conservation. We need a new source of financing that will allow for proper management – sustainable financing – and that is our role, to find investment opportunities that will contribute to better marine reserve management.”

“While we have seen an increase in the number of marine protected areas, many don’t do what they are designed to do unless they are effectively managed, and that needs money,” argues Pascal.

If they are able to reach their objective, argues Pascale, “Fisheries will be enhanced, tourism will improve because of the scenic beauty and calmer waters, and coastlines will be more resilient to the impact of waves caused by hurricanes. There’s nothing to lose.

Agreeing with this, Kristin Rechberger, chief executive of Dynamic Planet, which works with businesses that invest in nature, says, “You have to provide the data to show it is the interests of the country’s economy.”

“For economies that are reliant on fishing, we know that marine reserves can produce on average almost seven times the amount of biomass.”

In terms of how the blue market compared to the green market, Thiele argues, “We should get used to thinking about our ocean as this collective blue opportunity.”